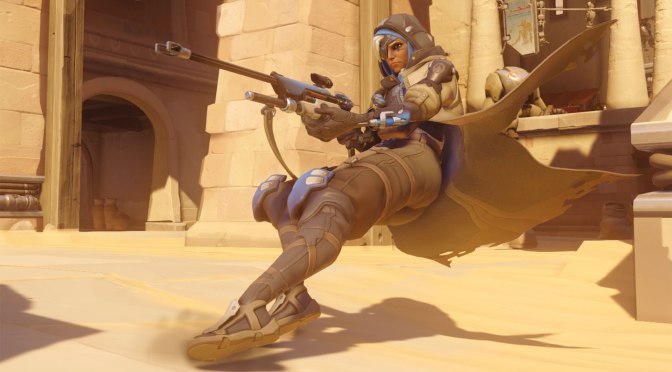 Overwatch’s 22nd character is upon us.

After weeks of frenzied speculation, the moment has finally come: Overwatch’s next hero, Ana, has been officially announced by Blizzard.

Ana, who is Pharaoh’s mother, is essentially a Widowmaker and Zenyatta love baby, a sniper support character, capable of long-range healing.

Here’s a full rundown of her abilities:

Ana’s rifle shoots darts that can restore health to her allies or deal ongoing damage to her enemies. She can use the rifle’s scope to zoom in on targets and make highly accurate shots.

Ana fires a dart from her sidearm, rendering an enemy unconscious (though any damage will rouse them).

Ana tosses a biotic bomb that deals damage to enemies and heals allies in a small area of effect. Affected allies briefly receive increased healing from all sources, while enemies caught in the blast cannot be healed for a few moments.

After Ana hits one of her allies with a combat boost, they temporarily move faster, deal more damage, and take less damage from enemies’ attacks.

Currently, there is no release date for Ana, however, Blizzard says she’s coming soon. For now, to hold you over, here is some of her gameplay footage, and more background information:

I’m not a good sniper or support character, but that’s not going to stop anyone else, or me, from playing as her all day when she releases.