Call it a diving simulator, a mahi-mahi riding simulation, or whatever you like — it doesn’t change the fact that ABZÛ is one of the most breathtakingly beautiful, atmospherically charged, audiovisual triumphs to date on the PlayStation 4. Worthy of standing aside games like Journey and Flower — ABZÛ is a rapturous, masterfully crafted, piece of art.

It should come as no surprise that ABZÛ has awe-inspiring visuals, after all it’s from the art director of Journey: Matt Nava. I was aware of this going into the game, yet I was still thoroughly caught off guard by just how alluring to the eye the game’s aesthetics are.  It is the type of serene, cathartic, beauty that glazes over you and suffuses you with child-like wonder, a wonder that is very rarely drawn out of the video game medium. Slowly exploring its underwater playgrounds feels in itself a meditative exercise. Combine this with the game’s mesmerizing soundtrack quietly beguiling you in the background, and you have one of the most calming games ever created. Once I started up ABZÛ , I never once looked away until the credits rolled. No game has done that to me in years.

In ABZÛ  you play as a nameless, wordless diver who is plopped into a vast ocean and whose only option is to tour what lies beneath. The moment you take control of the nameless protagonist you are overcome with a feeling of affiliation, prodded by this feeling and natural instinct, to start exploring. The gameplay noticeably excludes things like combat, fail states, and a heads-up display, merely consisting of simple up-down, right-left, swimming mechanics. Oh, and you can do rad underwater (and above water, if you’re pro enough) flips. ABZÛ  debars these traditional staples in favor of evoking a vast array of emotions — resulting in a simple, but beautifully pieced together experience.

The campaign follows a linear path, but you’re usually permitted to explore at your own pace, something you will want to do as each area is unique not only in looks, but also in what type of underwater fauna and creatures it contains. It’s very easy (as I found myself doing it many times) to stop swimming, and to just pan the camera in every direction, capturing every square inch as much as you can. As you explore each area you can also collect shells (that do nothing besides provide a trophy/achievement) and reveal hidden areas that, once interacted with, release a new species into the area, where it will exist, swim, and be interactable with. Spicing up the place with some leatherback turtles is just plain nice, you know?

As you explore lush kelp forests, lively coral reefs, and ominous trenches home to giant squids, you will be constantly reminded of how otherworldly, foreign, and intimidating the ocean can be. Sometimes you will be exploring this vastness alone, other times you will be accompanied by schools of fish as you race through a jet stream, or a pack of awe-stricking blue whales, that will remind you of your vulnerability and insignificance in the big ocean. Throughout the journey you will also be inconsistently accompanied by adorable and endearing little strange robots, whose presence (at least at first) is quite puzzling. Regardless, the cuddly things will play and swim aside you, keeping you company at different parts of your journey. If that’s not enough you can also grasp onto larger creatures, such as hammerhead sharks or manta rays, and glide effortlessly through the area. Throughout the game you will also stumble across meditation statues, that will enable you to pause and experience the world around you from the perspective of the nearby animals. The feature is merely a paltry inclusion, that allows simply the opportunity to observe the layered ecosystems you were just swimming through. It’s a neat addition, but one that felt frivolous enough that it warranted only a single investigation. 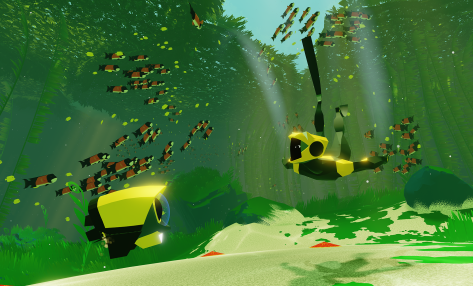 As you progress through its narrative, ABZÛ begins to open up as more than a swimming with the fishies simulator. You’ll soon encounter several, relatively simple, exploration-styled puzzles, and the occasional tense moment or two, as you descend through murky waters or encounter some of the ocean’s more menacing creatures. These moments — along with many others — are accentuated by clever camerawork, as the camera occasionally pulls back or moves around to better communicate scale of certain creatures and environments.

Additionally, as you advance through the story you will begin to uncover scattered ruins — as oddly harrowing as they are elegant —  of an ancient civilization. The more you progress the more grand and common the ruins become. Decorated with intricate designs, Egyptian-styled paintings, and ornate windows, they project an Atlantis-type vibe, but more importantly hint at tragedy and further unveil the narrative at hand.

And then there is the negative. Fortunately for ABZÛ , the negative comes in the form of two minor complaints. The first being that at times the story is a bit obtuse, and feels as if it was tacked on completely as a second-thought. Overall the story is adequate (as it isn’t the driving force of ABZÛ ), but there were a handful of times the story so seamlessly passed me by, that I was left in a state of incertitude.

Then there is the second and slightly more glaring issue, and that is the swimming itself. The swimming walks the fine-line between wondrous, unearthly movement, and organic motions you may find in an actual human swimmer. It nails this mixture, rather effortlessly. However, while playing I couldn’t help think and yearn for more of the aforementioned movement, and less of the latter. Everything around you in ABZÛ  — from the striped marlin to the great white shark — moves so deftly and seamlessly, that sometimes the less skillful nature of the protagonist was distracting, and felt out of place in a game that so beautifully weaves you into its world. Alas, these are minor, borderline negligible grievances, and far from warrant any type of serious hesitation towards this game.

ABZÛ is the perfect palette cleanser. A short, tight experience that knows exactly what it is, and what experience it wants to give you. The best writer in the world, paired with a Morgan Freeman narration couldn’t do this game justice — it’s simply one of those rare journeys that you truly have to experience for yourself in order to understand. In short: Abzu is a beautiful, gratifying piece of art.

For more information about what the score means, check out our official review scale