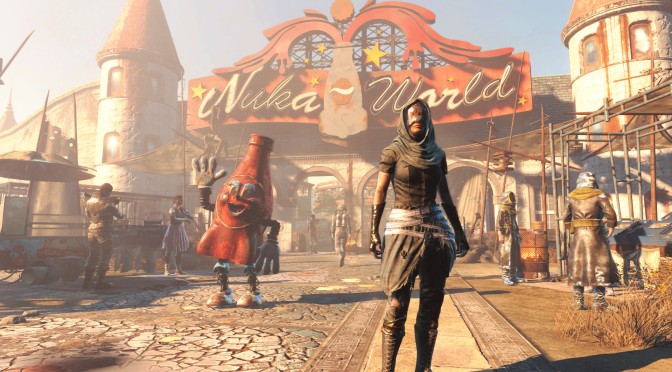 Nuka-World, is set in a post-apocalyptic amusement park, where Raiders have set up shop. Within the park, players can explore Nuka-World’s various zones: Safari Adventure, Dr Rock Gulch, Kiddie Kingdom, and the Galactic zone.

Players will also be able to lead gangs of Raiders (for the first time in Fallout 4) and use them to overtake settlements. Additionally — as you would expect — there are new quests, weapons, enemies, and more to discover in the new piece of DLC.

As mentioned above Nuka-World is Fallout 4‘s sixth and final expansion, following Automatron (March 2016), Wasteland Workshop (April 2016), Far Harbor (May 2016), Contraptions Workshop (June 2016), and Vault-Tec Workshop (July 2016). All of that, as well as Nuka-World, is included with the $50 Fallout 4 Season Pass.

Don’t want all of that? Just want Nuka-World? Well, you can buy Nuka-World alone currently for $20.

After being disappointed by Far Harbor, I completely fell out of Fallout 4. While Nuka-World looks exciting, I just have no interest in diving back into that world.