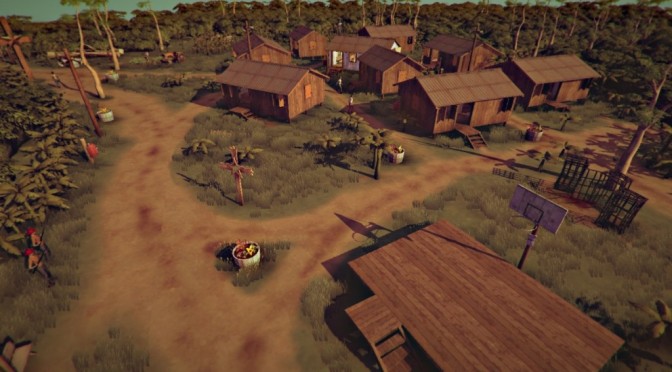 Earlier this year story-driven action game The Church in the Darkness was announced for PlayStation 4, Xbox One and PC. Upon announcement, details were scarce, however, now through HardcoreGamer more details have surfaced.

Along with the  above trailer, all we really had was the following elevator pitch about the game:

“The Church in the Darkness combines unique narrative with tight top-down action-infiltration gameplay in an open-ended environment. As Vic, an ex-law enforcement officer, you travel to South America to get into Freedom Town and check on your nephew, Alex. Play how you want – you can avoid detection completely, take on the guards using non-lethal methods, or kill anyone who gets in your way. But you’ll have to live with the consequences of those choices.”

It’s known now that each time the game is played, the narrative is procedurally generated. This means the camp layout is different and the beliefs of the leaders and followers as well. Further, sometimes the camp with be rife with oppression, brainwashing, or some other type of religion based horror control method. Other times the place might be seem (or appear) fine, with people content in worship.

As we already knew the couple at the head of the cult are actually voiced by real-life couple Ellen McLain (GlaDOS from Portal) and John Patrick Lowrie (Team Fortress 2’s sniper). What we now know is that no matter their motivations they bring a bit of a menacing vibe, and don’t react well to outsiders (you, the player) to sneaking around, or disturbing things. What happens when you do these things and they find out? Well, that bit hasn’t been divulged yet.

The Church in the Darkness is set to release sometime in the first half of 2017 for PS4, Xbox One, and PC.

The Church in the Darkness ranks among the top in my most anticipated games for 2017. Specifically the tone of the game looks absolutely amazing, and unsettling.