Yesterday, BioWare and EA celebrated N7 Day, which is a day dedicated to the Mass Effect series. As expected, they released new information on Mass Effect Andromeda as well as a few extra surprises.

It started off with a brand new cinematic trailer for Mass Effect Andromeda. It primarily showed Scott Ryder as he is being called the new Pathfinder. Some new information has been revealed in a Game Informer cover story, with more coming each day. Yesterday, they revealed the Ryder family. There is Alec Ryder, voiced by Clancy Brown (LOST, Spongebob Squarepants), Scott Ryder, voiced by Tom Taylorson (Octodad: Dadliest Catch) and Sarah Ryder voiced by Fryda Wolff (Civilization: Beyond Earth). EA and BioWare have said that the first major gameplay footage will be released during The Game Awards on December 1st, 2016. Game Informer also revealed that Loyalty Missions are back.

EA has also announced several collector’s edition of Mass Effect Andromeda. The higher end editions, the $100 and $200 bundle, do not come with the game.

There is the normal $59.99 edition. This is the most basic version of the game with no extras.

The $69.99 is the Deluxe Edition. This will include some in-game extras like a Pathfinder casual outfit, scavenger armor, pathfinder elite weapon Set (4), pet pyjack (monkey), digital soundtrack and a multiplayer deluxe launch pack.

Then there is the collector’s editions that does not come with the game. This will come with the NOMAD ND1, Mass Effect Andromeda’s version of the Mako. It’s a 1:18 scale, diecast metal body, Fully detailed interior and illuminated control panel, powered by 3 AA batteries (which is also not included) and a limited edition steelbook case for the game. This version will set you back $100.00.

The next version includes the same thing as the $100 edition, but this time the NOMAD ND1 is RC vehicle. It can be controlled by using an App, 6 wheel drive with front and back steering, Functioning LEDs and built-in camera, Built-in rechargeable battery with USB charge cable, Individually numbered and will also include  the steelbook case. This version will be $200. Like the $100 edition, this too does not include the game. 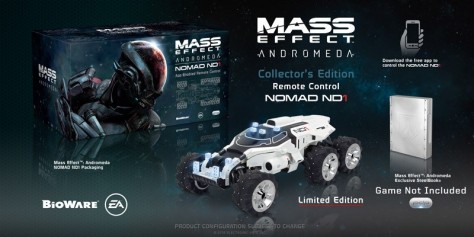 The last thing that was announced at N7 Day is that Mass Effect 2 and Mass Effect 3 is now backwards compatible with the Xbox One and if you are an EA Access member, you can download and play the whole trilogy right now. 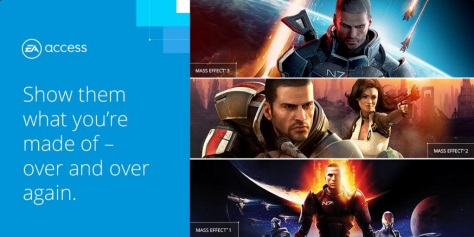 Mass Effect Andromeda is expected to come out Spring 2017 for the PlayStation 4, Xbox One and PC.

I love Mass Effect, so this day was awesome for me. To make it even better, I just got a Xbox One S last week with Battlefield 1 and it came with a month long trial to EA Access. So, naturally, I’m playing the Mass Effect Trilogy right now. I can’t wait to see more of Andromeda in the coming weeks.

Jesse Webster is the Senior Writer of Middle of Nowhere gaming and it’s good to see Emily Shepard again.