The Nintendo Switch is less than two weeks away from launch, and the flexible new machine has been a divisive topic of discussion that has dominated the community. While many, myself included, are incredibly excited for March 3rd, there is a massive contingent of gamers that do not agree, and are not afraid to share their opinions. In fact, given what we know, or rather, what we do not, many could not possibly understand why anyone would be excited about the Switch. The future early-adopters and I have been called morons, fanboys, Nintendorks, Nintentards and a number of other clever names and Nintendo puns. Despite these assaults on our intelligence, there is a passionate community who couldn’t be more thrilled for the console.

I think it’s time to educate against this negative narrative. No, this does not mean that that I am out to convince you that I am right and you are wrong. The Switch is not a perfect machine, and there are many questions that continue to cloud its future. Third party support, online infrastructure, virtual console and internal power are real concerns that exist. You have every right to be skeptical. But that does not change our tune. I’m here to pull back the veil; to give you a glimpse into the mindset of a Day 1 Switch buyer. You don’t have to agree with us, but hopefully you can understand where our heads are at.

While I cannot speak for every Nintendo fan, I’m sure that a large percentage of that base can at least partially connect with my history with the company. I cut my gaming teeth with a Gameboy Color in one hand and an issue of Nintendo Power in the other. I have owned every Nintendo machine since, with many of those purchases occurring on, or near, launch day. The Legend of Zelda, Pokémon, Mario and the rest of Nintendo’s colorful first party have all had lasting impacts on my life and provide some of my greatest memories. Nintendo introduced me to the wider gaming world, and while my tastes have widely diversified, their games have continued to appeal to me beyond simple nostalgia. I keep my finger to the pulse of Nintendo news, leaping for joy or groaning in annoyance at the company’s announcements. Nintendo continues to remain a large part of my life, and I drop everything and listen when they have something to say.

Calling Nintendo unique is an understatement. They take a inherently different philosophy to the games business than any other publisher or developer. For Nintendo, everything stems out of one word; fun. Namely, is a game fun to play, what contributes to that sense of fun and how can as many people enjoy it as possible. This is an appealing philosophy, and when we boil down to it, we all play games because they are fun. I’m not saying that PlayStation and Xbox do not put an onus on fun, but those companies take a more mature approach to the concept. Their games are like cocktails; they combine different ingredients that work together to create something great. Nintendo doesn’t create a mixture. They begin with a kernel of fun; collecting, exploring, jumping, painting. Everything then builds from there to create a special experience. Every Nintendo fan appreciates and loves this gaming philosophy, and it is why we continue to come back time and time again.

This philosophy is not exclusive to their games, as their hardware mirrors the idea. Every console is based around a fun way to interact with or control games. The analog stick, portability, touch, motion, 3D effects; these ideas each had a console experience built around them. While many would call these gimmicks, there is no denying that Nintendo understood how to build experiences that were enable specific functionality. Some became gaming standards while others quickly exhausted their potential, but they each bred different types of fun and control that were not possible without them. The Switch follows in this tradition while simultaneously existing in between Nintendo’s areas of expertise (handheld and console). This promise alone is enough to get us in the door.

You may be wondering why we still put stock in this promise after the debacle that was the Wii U. Because, yes, we understand that the Wii U was a failure. We were burned. There are a multitude of reasons about why it failed, but to the Nintendo fan it is simple; there was never a justification. Nintendo built a console around the idea of a second-screen experience with a tablet controller, but never gave it a reason to exist. It was Nintendo console without the company’s trademark fun, as it was trying to keep one foot in the Wii era rather than letting the idea truly soar. The result is well documented, with even the most devout of us being truly tested. Fool me once, shame on me.

But as much as the two are compared, the Switch is different. It’s main feature is its flexibility, an idea that is simultaneously simple and appealing. Our experiences have always been separate, but now they don’t have to be. It is truly a Nintendo fan’s dream. What’s more, this feature is unobtrusive for third parties. They can develop experiences for all three platforms, and the Switch inherently gives the game a unique feature. Switch’s bells and whistles are optional and not a core part of the experience, meaning developers aren’t forced into adapting to unconventional controls. This will hopefully lead to a larger platform that will attract the install base necessary to make the Switch’s dynamic social experience possible.

This all comes together into an experience that is uniquely Nintendo. Rather than being based on a new input of control to create new means of fun, the Switch is based on the idea that the fun never has to stop. We believe in this idea to the point where the other little things don’t matter. System power? It seems powerful enough to facilitate plenty of great gaming experiences. Internal memory? SD cards are cheap and we won’t have install from a disk thanks to the return of cartridges. Accessory prices? Expensive, yes, but we get almost everything we need right out of the box. In other words, we like the idea so much that we are perfectly fine with the compromises that Nintendo made in order to make it happen. And the best part? This idea is packed into a piece of tech that, by all accounts, feels more like an Apple product than a typical Nintendo toy.

We understand that there are still concerns, with online services being chief among them. But to us, the small yearly investment that Nintendo is asking of us is just that; an investment. They understand that in order to create an online system that is competitive they need the capital that a subscription brings in. Will it be worth it? We don’t know, but we are willing to take a chance. Virtual console is another facet to the issue, but recent leak videos that dissect the UI point to account-tied purchases, giving hope to the notion that we will finally get to keep our digital libraries.

The launch lineup is another outside concern that we are perfectly fine with. The Legend of Zelda: Breath of the Wild is a killer app in our minds for the portable console experience, regardless of whether we can play it on Wii U. Because the Wii U sucks, and while it has some great games, I personally never want to play anything on that glorified leapfrog tablet ever again. The other games ensure there is something for everyone while cutting on the clutter of other recent launches. The great games don’t stop at Zelda either, as unlike the Wii U the Switch’s first year looks great. Mario Kart 8, Splatoon 2, Xenoblade Chronicles 2 and Super Mario Odyssey are just some of the first-party entries that we know about coming in the first year, which already puts the Switch miles ahead of the Wii U and even the 3DS. 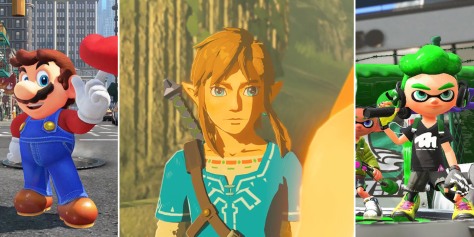 Finally, the price point is the magic $300. While $250 would have been a dream come true, the final price is both reasonable and flexible if Nintendo has to pull a 3DS and drop the price quickly to spur sales (still can’t believe I spent $250 on the launch version). While its console brethren can be had at similar prices, the Switch offers something truly different from them that complements them well for gamers that own them. In addition, the Switch packs in a wide variety of unique features and comes with two controllers, allowing multiplayer play right out of the box. Despite the lack of a traditional Nintendo pack-in, the Switch is a compelling piece of tech at an appealing price.

I am incredibly excited to finally get my hands on the Switch in a few weeks, and the negativity that has existed in the corners of the internet has had little impact on my preorder decision. I understand why you would have questions about the Switch, and there are very real concerns that Nintendo must address to truly take the next step. However, their unique penchant for simple fun at the core of their consoles and games make the Switch’s one-of-a-kind functionality a must buy for many. If you want to wait until Mario to jump in, wait out the online situation or simply don’t have interest in the Switch, there isn’t anything wrong with that decision. However, there are a large number of us who are ready to dive in on Day One, and hopefully you now have a better idea about where our minds are at as March 3rd approaches. We can’t wait to get started, and look forward to the naysayers potentially joining us.

Brett Williams is an Associate Writer for MONG who is considering freezing himself in order to expedite the final 2-week wait for the Nintendo Switch. No way that could backfire. You can follow his nonexistent ramblings on twitter.