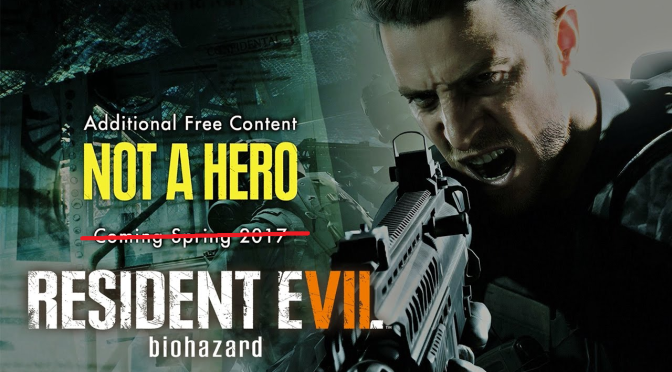 Capcom aimed to return Resident Evil 7 (RE7) to the horror roots of the series, and found great success in doing so. However, high expectations and player feedback has seemingly caused a delay for the next piece of downloadable content (DLC).

RE7 Producer Masachika Kawata and Director Koshi Nakanishi appeared in a new video to announce the delay.

“The free Not A Hero DLC which was announced for Spring 2017 is going to be delayed,” said Nakanishi. Kawata added: “We were working very hard to get the DLC ready in time for the Spring release…” Nodding, Nakanishi continued his co-worker’s thought: “And we got close to completing the game content. However, in light of the incredible reception to the release of Resident Evil 7, we concluded that this DLC was not good enough to meet those high expectations.”

Executive Producer Jun Takeuchi appears later in the video, sharing his own thoughts on the matter:

“We would therefore like to take more time to bring it up to the standard you expect. We are also working on a further piece of DLC at the moment, and we wish to deliver both of these to you only once we are confident that they are polished and up to the standard you expect from Resident Evil 7. I hope you can understand our decision to keep you waiting, and ask for your continued support of Resident Evil 7. Thank you!

An updated release date was not announced, though you can surely expect to hear more in the near future. If you have not yet played RE7 for yourself, consider reading our review.

This isn’t too surprising, as there had been no mention of this DLC after its surprise announcement following RE7’s ending. Even so, it’s disappointing — but delays are usually for the best.