ASSASSIN’S CREED IS BACK

Assassin’s Creed Origins takes the player into the true origins of the Assassin’s Creed Brotherhood; as well as the predecessor order to the Templar order. While in Ancient Egypt during the year 49 BCE, Cleopatra rises to the throne. The player controls Bayak, the last Majey –  an elite police force during the old kingdom of Egypt that faded away by Cleopatra’s time in power – who is out for vengeance on the man behind a traumatic event that Bayek is haunted by during the story of the game. During Bayek’s journey, you explore all of Ancient Egypt to uncover every member of the group that had a hand in Bayek’s traumatic event in Assassin’s Creed biggest open world map in the franchise to date.

There is something enjoyable and great about the story of Assassin’s Creed Origins with the revenge tale of Bayek. One of the only things I did not like, however, has to do with Aya, Bayek’s wife who has all the same skills as Bayek. She’s great, but I wish there were more of her in the game. Honestly, wish she had her own game so I could spend more time with Aya as a character, she is such a charismatic character that deserves more time fleshing out her story.

One other criticism I have has to do with the portrayal of Cleopatra in the game. She’s introduced to the player in the way that all media present Cleopatra as this way over sexualized character. If the story of Assassin’s Creed Origins needed this oversexualized Cleopatra as a character, then I can see that, but it’s still a missed opportunity to do Cleopatra right and not treat the Roman propaganda of her as fact.

Assassin’s Creed Origins gameplay is excellent and plays precisely like an action RPG now. The gameplay of Assassin’s Creed Origins has overhauled the attack and counter fighting system the franchise is infamously known for critically. Fighting enemies has more of a feel for a gladiator’s face off, with tactics through dodging to get behind and applying the most damage to those annoying shielded and massive enemies. The gameplay has improved so much I can’t help but compare it to action RPGs like Horizon: Zero Dawn.

I have to say even though the gameplay has improved over past entries of the series; it’s not perfect gameplay by any stretch of the imagination. This game is a step in the right direction though. The feel of combat with equipable weapons; the bow and arrow aiming mechanic can improve in the next entry. The parkour of the game has never been better; it doesn’t have that comedic badness that other entries had when it comes to jumping to death by mistake. It feels much more controlled, where you can leap to an early grave, but that’s your decision now.

One thing that this game does uniquely well is how it uses Eagle Vision in gameplay. Historically, Eagle Vision is an unlockable ancestor bloodline technique for the main protagonist. Since this is an origin game, Eagle Vision doesn’t seem to exist; I assume anyway. Bayek’s eagle companion is the eagle vision for Assassin’s Creed Origins. With a tap of a button, you automatically switch perspectives from Bayek and Semu (the eagle). While controlling Semu, you can mark enemies and even NPC; this gives the player an exact idea where all characters are in the area. It’s bizarre and gives me the impression that Bayek can mentally control his eagle companion but it’s still an impressive and unique way of doing eagle vision in this entry of the franchise. 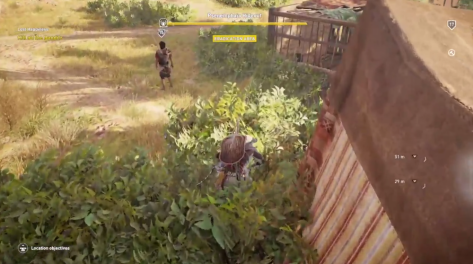 One more thing, Ubisoft brings back and updates the ship combat from past entries in the franchise. This gameplay can only be played through story after your character switches to Aya’s memories. It’s 48 BCE, so there is no gunpowder in this iteration of the ship combat gameplay, many crew members who aim fire arrows at the target replace the cannons with motors being replaced by support from allied ships. Critically this version of the ship combat is not as fun as the ship combat in past games. Most damage to enemies comes from ramming your vessel from my experience, and everything else that does damage feels weaker. I hope Ubisoft keep working on this part of the gameplay to make it fun like it was past generation Assassin’s Creed games for this console generation.

This new entry into the series is also Assassin’s Creed’s first step into the RPG genre by introducing level progression and leveled enemies to the franchise. As a massive fan of RPG genre, this part of the game is the central aspect that made me enjoy my time with Assassin’s Creed Origins. Main and side quests are essential in RPGs and Assassin’s Creed Origins goes all in on that aspect. The amount of side quests that can be accepted by your character is shocking. I’ve personally spent ten or twenty hours alone going through the side quests the game has to offer.

Like in any RPG, leveling up your character and gear is essential to progressing through Assassin’s Creed Origins; which is given a quality score ranging from zero to beyond 100. The higher the score, the more damage it does to enemies in gameplay. In the gear menu, the player can equip two bows and two melee weapons. Most gear can only be equipped depending on your level. Gear that can also equip outfits, shields, the horse/camel you ride in the game and tools; which unlock through the skill tree. 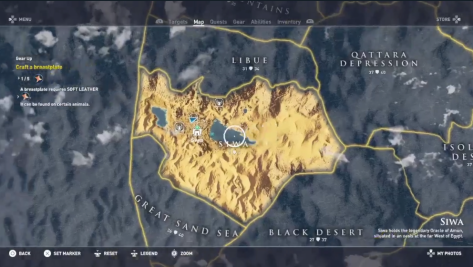 There is a big map to explore in the game, but that doesn’t mean you can go anywhere you want at your current level; I mean you can go to high-level areas if you wish to but a low-level Bayek is going to get quickly slaughtered. The map divides into sections that have a recommended level range, over time the player will get to explore all of Egypt; just not right out the gate.

The UI and menus for Assassin’s Creed Origins have also improved. I know that’s a weird thing to make a note of but going through the menu’s tabs from gear to the skill tree and quests makes this game feel less like an Assassin’s Creed and feels more like an actual RPG. I could even go as far to say that the design in Assassin’s Creed Origins is the best I’ve seen all year from any game released this year. With that feel of the game comes how the game looks. This entry of Assassin’s Creed has never had the best-looking graphics compared to other entries in the franchise. The world of Origins is a seamless, living and breathing world, if you pay careful attention, you can see NPC going through the process of mummification.

As a total package, this is the Assassin’s Creed I’ve been waiting almost ten years to play. The gameplay and exploration of the world with an enjoyable story are what makes me coming back to this entry of the series.

Taking my criticism of Cleopatra out of it, I have to compliment Ubisoft on creating a world that is as close to an accurate representation of Ancient Egypt’s world as a video game can get. This entry of the series is one I would recommend newcomers of the series; there aren’t that many callbacks to previous entries– only a few – but just a lot of easter eggs for fans who understood references in the dialogue.

Dennis B. Price is an Associate Writer for MONG and loves Video Games, DC/Marvel(equally), Anime, Wrestling and other nerdy things. Check him out on his Twitter.