END_OF_DOCUMENT_TOKEN_TO_BE_REPLACED

Bicycle, known for their quality playing cards, has begun their venture into the realm of tabletop games. In one of their latest creations, Exchange – A Light Strategy Game by Bicycle, offers a fun bite-sized strategic session that challenges players to anticipate the market as well as their fellow players.

Exchange – A Light Strategy Game by Bicycle is a stock-market simulation strategy game that pits players against each other as well as the market itself. As a securities trader, each player’s goal is to get the largest net worth on Wall Street by the end of the five-round game. Throughout the excursion, players need to carefully choose when to buy, best times to sell, and hope that the market doesn’t crumble before them.

Each player must also choose the founder they want to play as. These founders don’t have any special abilities or counter strategies, but instead give players their starting amounts for Banks, Bonds, Insurance, and Cash. The nice thing about this is that all the founders are actual historical figures (Barclay, Winthrop, etc) who signed the Buttonwood Agreement and eventually started the New York Stock Exchange. This is a wonderful nod for history buffs and can add a nice layer of educational benefits for those interested.

Gameplay for Exchange consists of three phases over five rounds.  Players need to first secretly select a security option (insurance, banks, bonds), then decide whether to buy or sell, and lastly choose how to influence the market by raising or lowering the value of a specific security. These are made through cards given at the start of the game and randomly assigned to each player. Choice are all done without other players knowing until all the choices have been made. Secrecy allows for everyone to figure out what kind of strategy they want to employ throughout the round and the entire game. Constantly and aggressively buy everything? Sure. Play it safe and sell for minimal profit? Why not.

Following those phases, a Market Forces Card is revealed, further adjusting the round and adding some minor or major occurrences to impact the prices on the Value Board. The final adjustment occurs, then players can finalize what they buy and what they sell for the round.

As if crafting your own strategy, predicting the market, and envisioning what the other players will do isn’t enough, there are alternate ways to plan for an upper hand. The Lobbyist allows a player to influence the market a second time, further enabling your reach in that round. Or instead, players can pay a nominal fee and see what the next Market Forces Card will be before it is revealed to the other players. Both are powerful abilities that can sway prices, practices, and behaviors.

My favorite part of Exchange was the volatility of the market bubble. One minute, stock prices can be $90 per share, and after one adjustment can plummet to $10. Players’ strategies sometimes go straight out the window, while others celebrate their splendors. 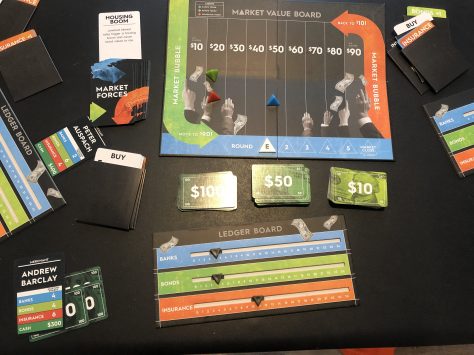 In terms of the play set itself, I was wonderfully impressed by the durability and fine details in each card. The cards, holders, and tokens were fantastically sturdy and could certainly take a beating. Quality was top of the list with Bicycle and it certainly shows!

During this review, I was able to play the game remotely with some friends (though I would not suggest this due to all the secrecy, placards, and strategizing) in all recommended group sizes; a game of 3, of 4, of 5, and of 6 players. Though each game offered a myriad of fun, I would suggest a group of 3 or 4 for players who want to take it slow, while players who want to jump right into the crazy shenanigans with a group of 6. The smaller groups also allow for the market, at least in my experience, to shift less – giving newcomers to acclimate to the game and get their footing with a meaningful strategy and prediction indicators. The larger groups often shifted all three options and requires players to anticipate multiple fronts while choosing what they want to do themselves. Gameplay for the smaller groups ended up being less than 30 minutes, while the larger groups were 30-45 minutes.

Exchange is a great party game that can challenge players to predict and anticipate the flow of the market without the stress of real money. With a quick setup, explanation of rules, and speed, there’s plenty of turnover and variations that can ensue; both for fun and for comical hardship. I can certainly recommend this for your future Game Night and (if you can muster it) future COVID video calls.

This game was provided by the Bicycle Games. 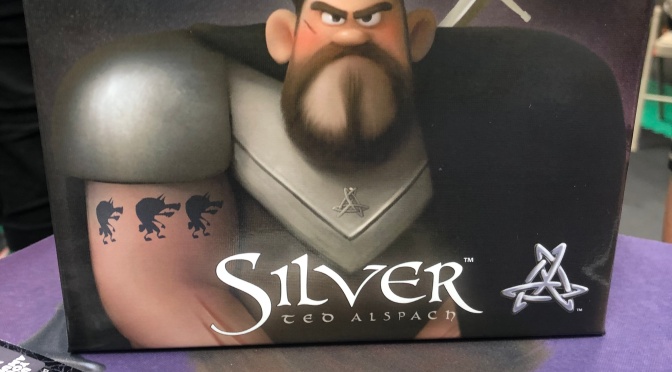 Though Gen Con 2019 was last month, the memories of some amazing games still linger. From video game inspired games, to deep role-playing tabletops, to even fun pick-up-and-play adventures, the options were plentiful. With this, here are nine games that we are absolutely excited to bring to our next Game Night! END_OF_DOCUMENT_TOKEN_TO_BE_REPLACED 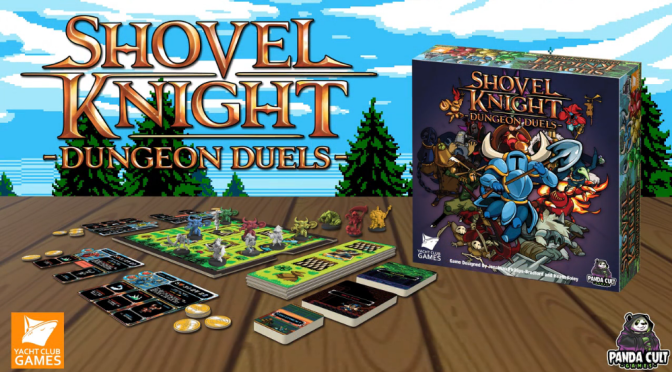 Panda Cult Games is a dynamic, charismatic, and enthusiastic small company with obviously passionate team members. With their successful board game, Wander: The Cult of Barnacle Bay, it’s not a wonder why Yacht Club Games entrusted the crew to create a tabletop adventure based on their beloved franchise, Shovel Knight. Recently, I was given the chance to get hands-on time with Shovel Knight: Dungeon Duels at Gen Con in Indianapolis and had an absolute blast! END_OF_DOCUMENT_TOKEN_TO_BE_REPLACED

The first few days of August were full of fun and tabletop games at Gen Con, the largest tabletop convention in the U.S. Happily, we got our hands on dozens of games and here are eight we’re excited to play again very soon! END_OF_DOCUMENT_TOKEN_TO_BE_REPLACED