After the original BioShock came out and shook the gaming world, its sequel was very much lackluster and brought the series down a tad. However, Irrational Games have looked to the heavens for some inspiration on a spiritual successor and came out with BioShock Infinite, a first-person shooter that takes a look around the mystical sky land of Columbia and its inhabitants. So, will Infinite live up to BioShock’s legendary status, or will it fall from the sky? 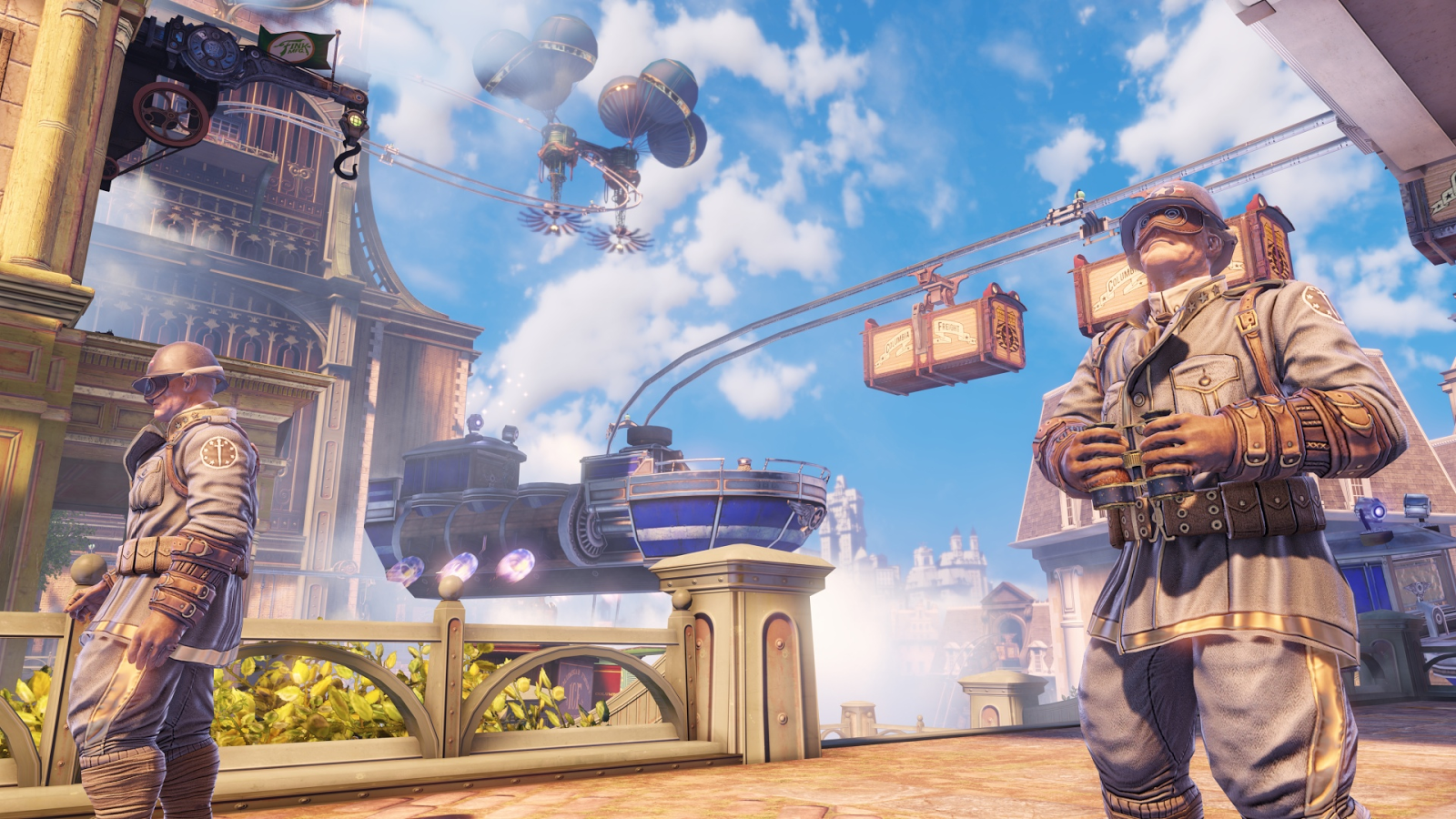 Fans of the original game realized that its story, although heavily influenced by Ayn Rand, was magnificent and dark. Infinite is no exception. Fans of the series will be quick to equate Rapture and Columbia, and they would be right to a certain extent. A world closed to society that is only accessible through a lighthouse and led by an eccentric leader seems almost copied from the original, but while Rapture takes a look at the Cold War era, Columbia takes a major look back to the days of Manifest Destiny.

The plot of this story takes the common trope of a damsel in distress and spins it around a bit. You play a Booker DeWitt, a private investigator tasked with rescuing a woman, Elizabeth, from Columbia in order to pay back a debt. Sounds simple enough, right? Get the girl, and get back.

When you first step foot into Columbia, it appears that the world is great for everyone. But then you see how it isn’t good for blacks, gays, the Irish, and basically anyone who isn’t born American. Columbia is so die-hard American that it worships the Founding Fathers as gods. 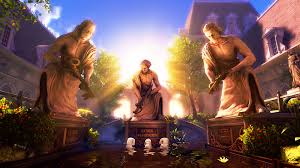 Speaking of religion, the story steps on a few toes. Aside from Columbia’s religion, there are several references to Judeo-Christian traditions, like Baptism and the washing away of sins, even as early as the lighthouse. As a Christian myself, I was able to separate myself from a work of fiction, but it does want to throw its own ideas in. Yes, the story speaks of Elizabeth creating tears in reality, so it obviously isn’t an entirely Christian game. However, just know that this game isn’t afraid to push some boundaries.

All in all, though, the game is a bit confusing. Without wishing to spoil anything, the story tends to make you think about it rather than enjoy it most of the time. In the first game in the series, the story had its twists and turns, but it was coherent and enjoyable. In Infinite, however, the story takes the twists and turns and leaves more questions than answers. It tries to put too much story in the game and just leaves it full of small subplots that can be too much sometimes. 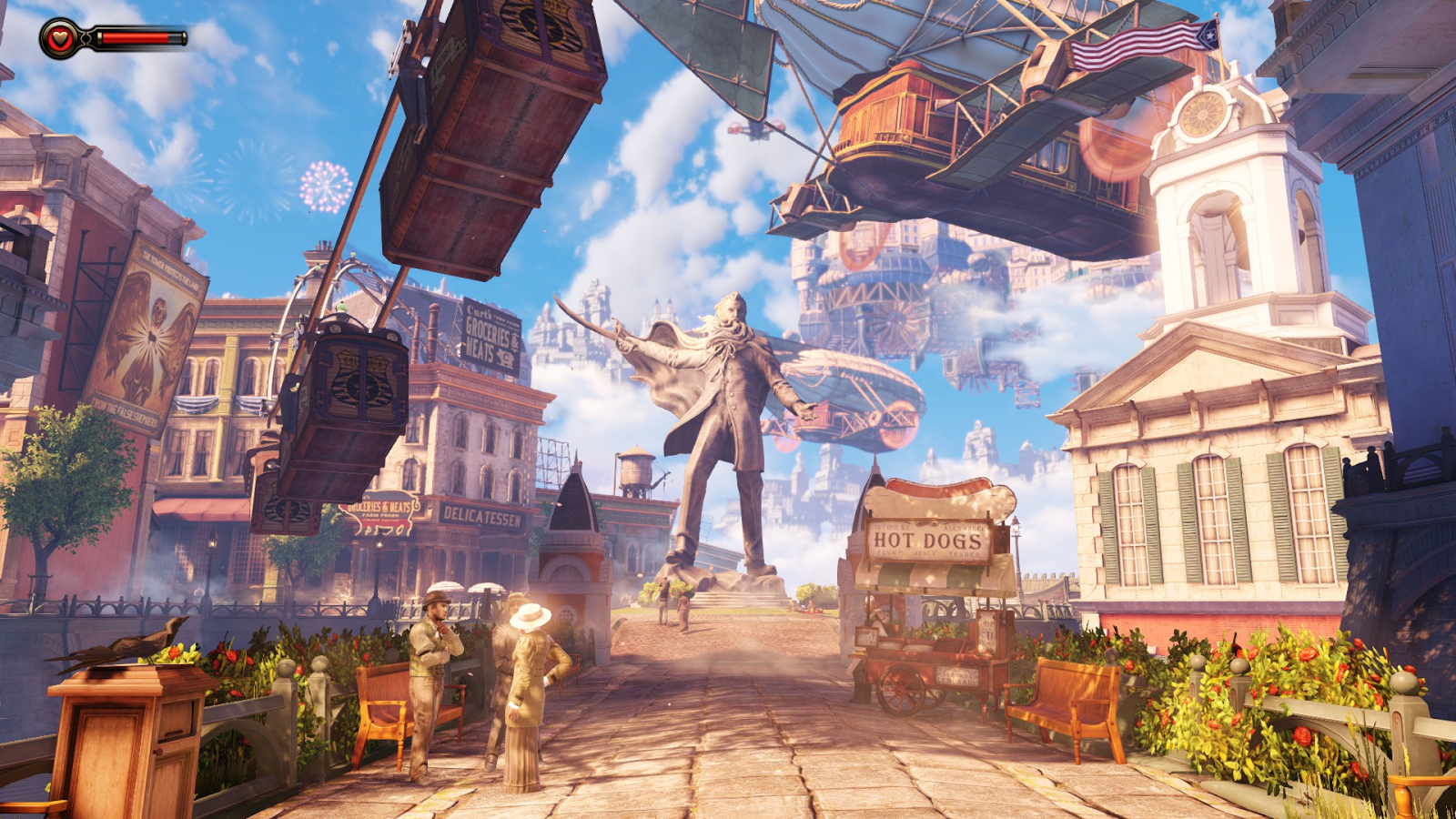 Again, the story takes place in the prime of Columbia, and OMGW (Oh My George Washington) it is beautiful. From the bright pastel-like colors of the outer city to the grimy walls of the innards of Columbia, the city doesn’t just look great, but looks believable. This looks like an actual city in the sky, not just some machinery that would never be operational. The characters, especially the main cast, also look great and believable. Columbia and its inhabitants seem to belong in this world, rather than stand out visually. 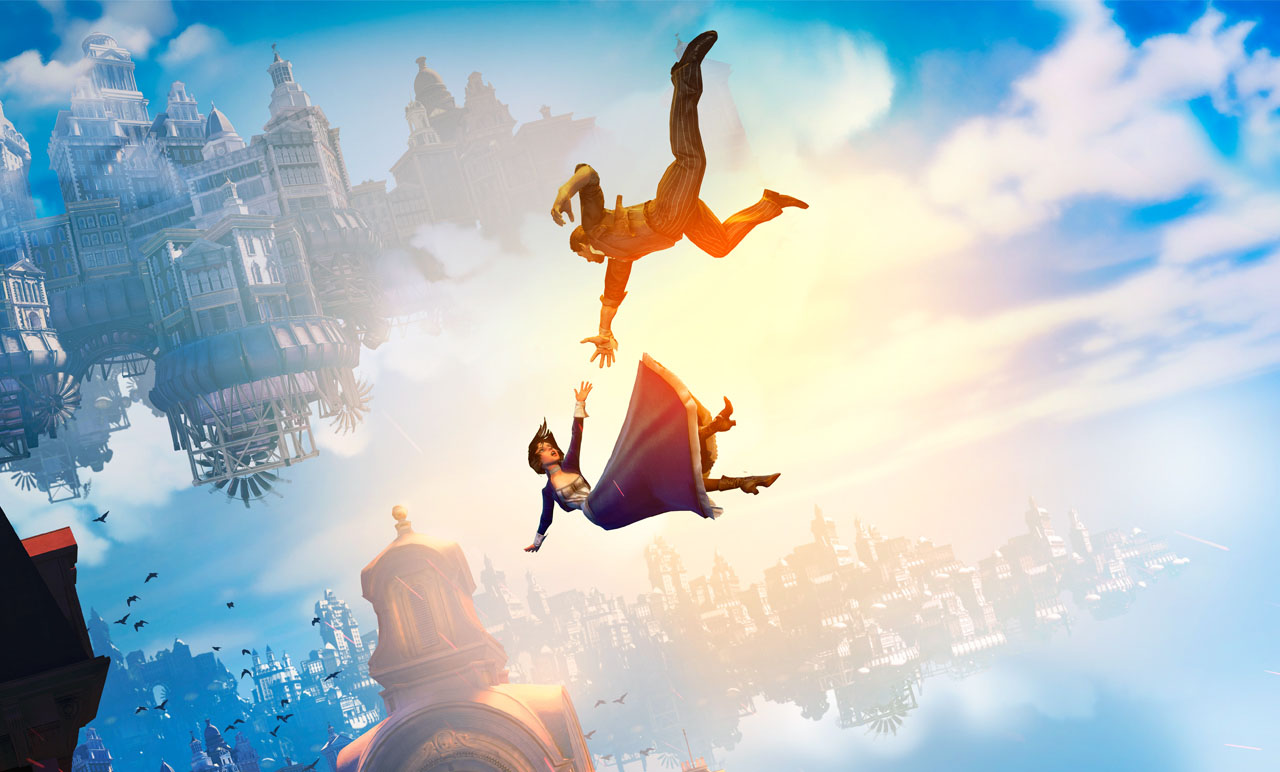 One notable change from the original Bioshock is Booker himself, who has the voice of Troy Baker, while the original game’s protagonist had no voice. Baker, along with Elizabeth’s voice actress Ashley Johnson, make voices seem natural and seamless in conversation, not forced at all. The other characters also have great voice actors and actresses, adding to the great value of the world.

All the other sounds in the world are amazing, including the soundtrack. From a barbershop-quartet style version of “God Only Knows” to an emotionally heavy “Will the Circle Be Unbroken”, the songs in this game have weight to them which adds significantly to not only the story but to the overall value of the game. Overall, this game has all the sights and sounds a Bioshock fan would expect from a pre-collapse version of the city in the sky.

While BioShock was a first person shooter with several elements of an RPG, like tonics, plasmids, and hacking, Infinite is mostly just a first person shooter. In that area, the game nails the genre. You shoot the guns, they do damage, and the enemies go down. However, in this game, that is the most central mechanic and it doesn’t take advantage of several gameplay elements that made the original BioShock awesome. 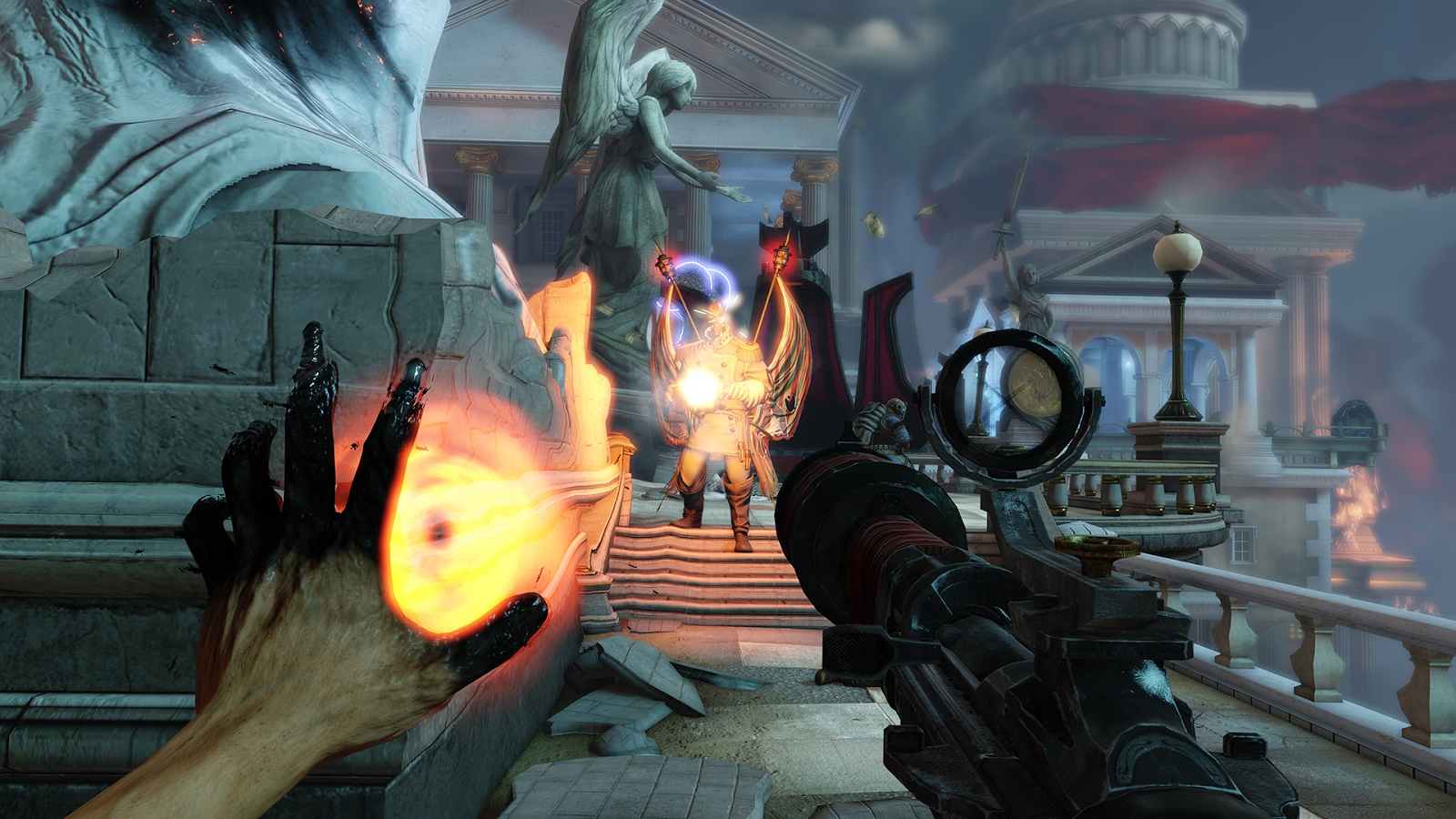 The plasmids from the original game make a reappearance in the form of vigors, which people give out like candy. This makes the atmosphere more complete, but it isn’t great from a gameplay standpoint. Several vigors can be combined and be laid as traps, but this doesn’t prove as effective as simply using them in conjunction with a gun. I never found myself using the other tonic capabilities. The ability to equip different gear also makes an appearance, but I never saw much of a difference with any type of gear over another.

Missing from Infinite that was also in the original is the photography segments, which is something BioShock did well, and the ability to hold all the guns with multiple ammo types at once. Instead, Booker can only hold two guns at a time, and each gun only has a single ammo type. I was disappointed in this in particular because it took out some of the strategy from before. Use bigger guns for bigger enemies and smaller guns for smaller enemies. I would advise carrying one of each in your two slots. 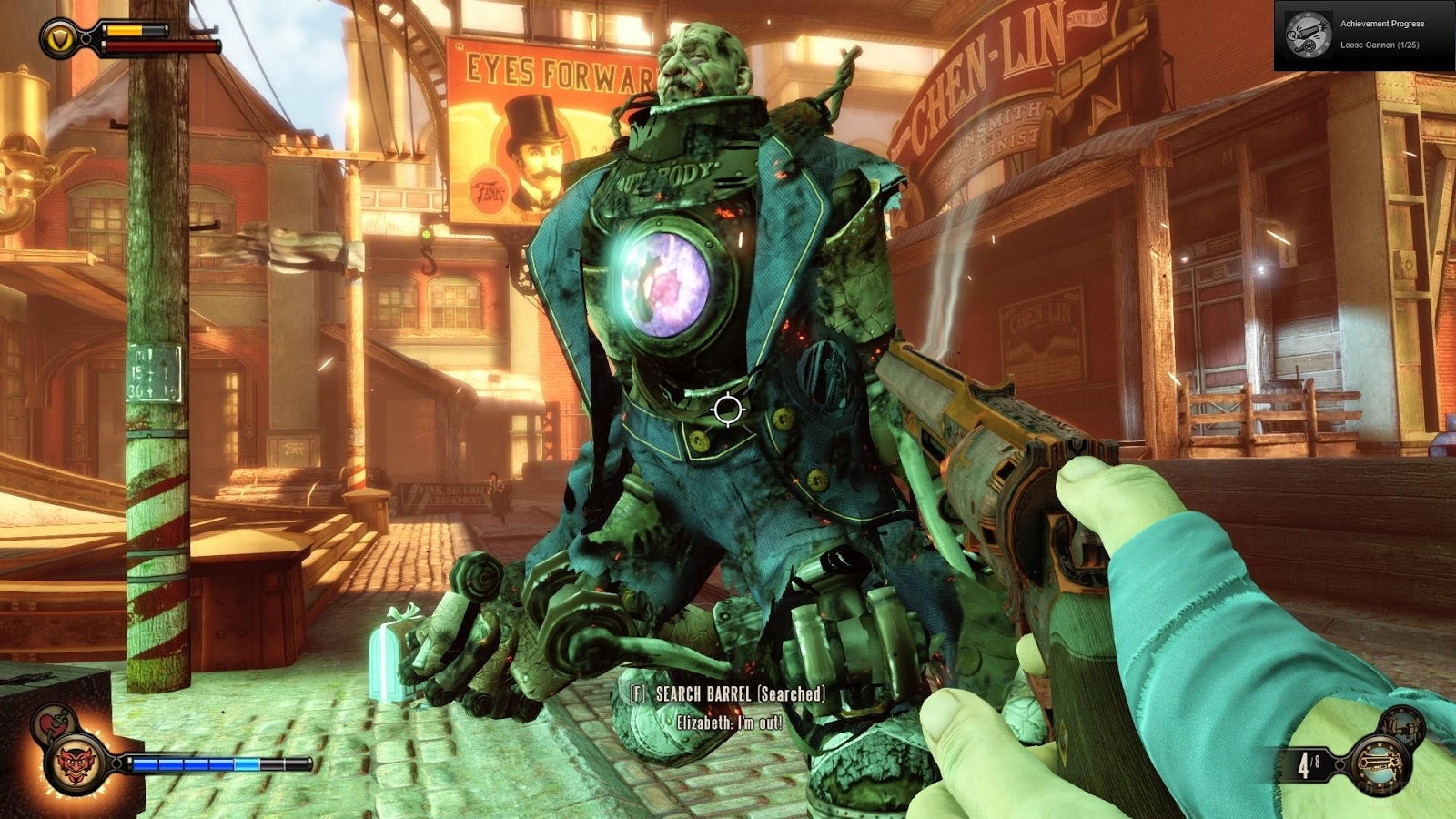 To replace this mechanic, Elizabeth helps using her powers by providing tears in space to bring out walls for cover, hooks to hang from, and guns to use. This provides some strategy, but I found that just bringing out everything to be my best bet and letting her scavenge for salts (which replace the original’s eve), money, and ammo. This is great, as enemies do not attack her.

Another great aspect of the game that adds to the strategy is the skyhook and rail system. Gone is the wrench of the past, and here is the skyhook, a handheld mechanism that lets you glide on the magnetized rails that keep Columbia together and kill people easily. Killing enemies from the rails is amazing, both while on the rails and jumping off. Some enemies can use the rails, too, which makes gunplay that much more interesting. I found these rails really interesting and fun to use. 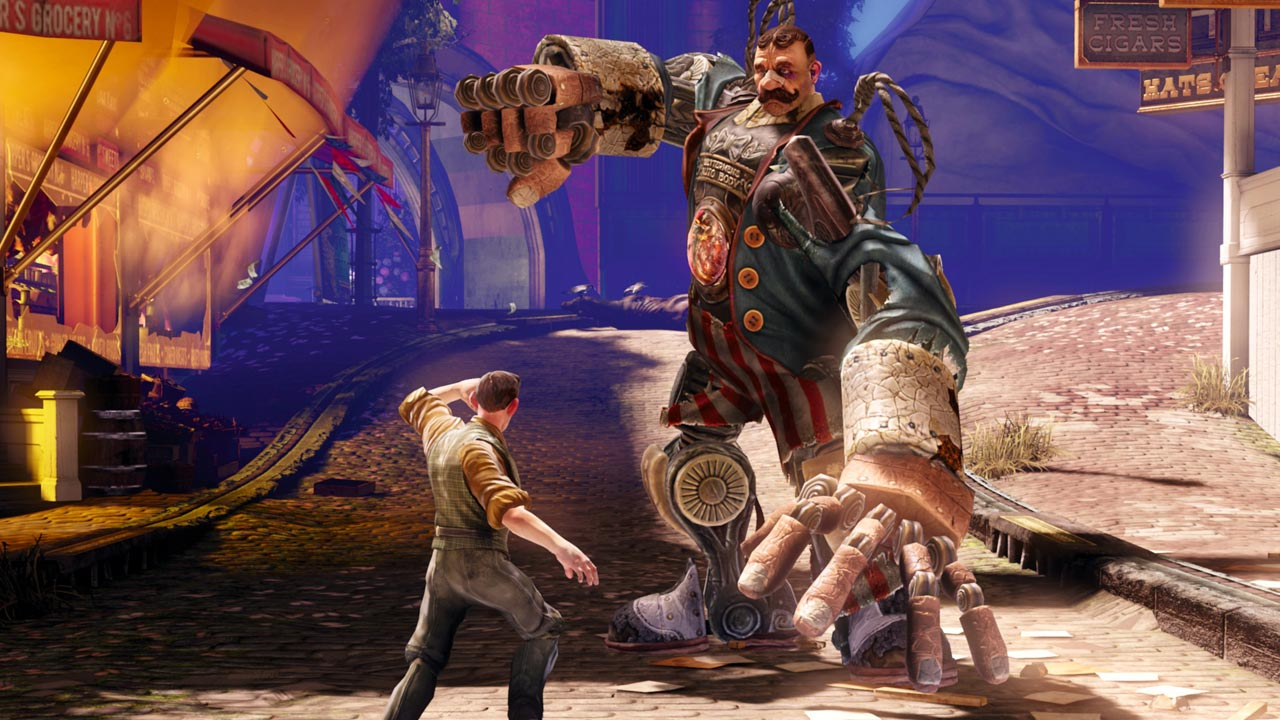 However, a low point for me was the lack of good enemies. Yes, the original only had splicers and the Big Daddies, but the slightly improved enemy variety doesn’t capture what the first game had. The Handymen and Patriots attempt to fill the shoes of the Big Daddy, but they never quite caught the odd charm of the mechanical beasts and are not as prolific. Other than those two types of enemies and the normal mob enemies, variety is lacking, which really let me down over the course of the game. Songbird makes an initial appearance, but isn’t too exciting and never really leaves in impact. 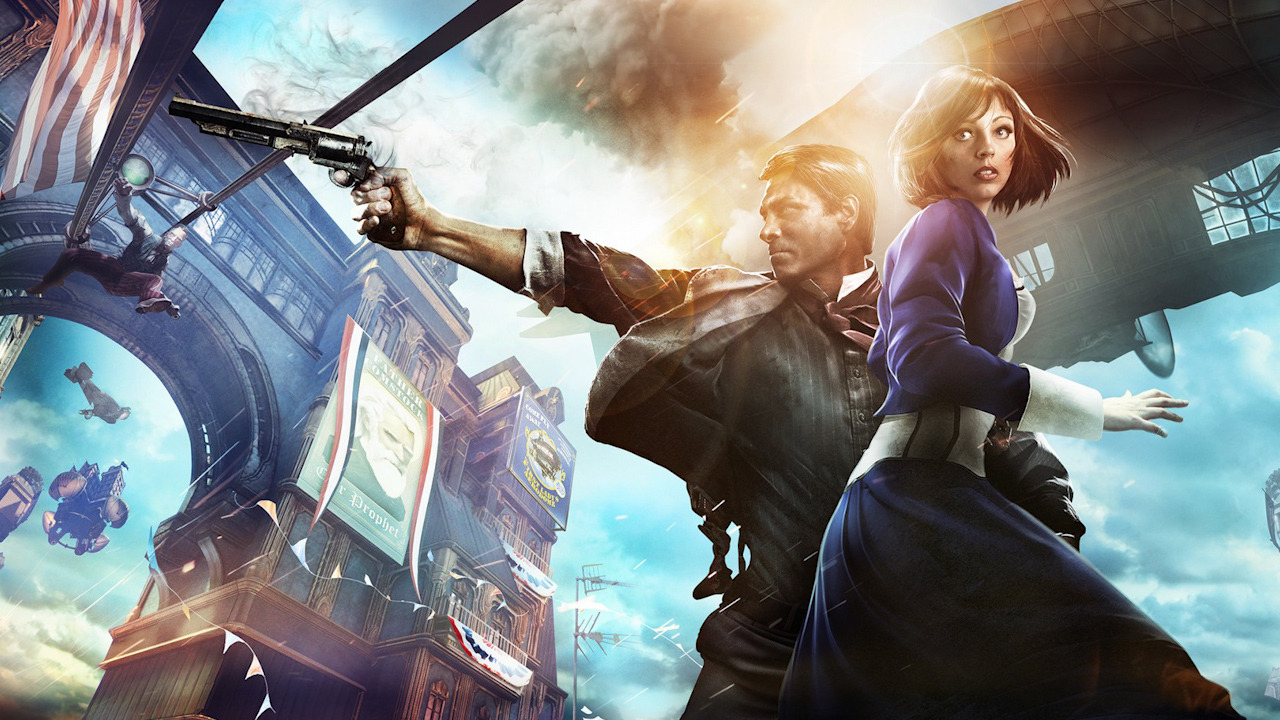 Overall, the game is amazing. It wasn’t quite as amazing as the original BioShock was, but it had amazing moments in the game that left me in shock and awe. It is also a great game to play because of exploring the beautiful city, listening and watching the citizens and learning about their past with voxophones and in-game movies, and defeating baddies still has a great feeling to it. Even though I wish that the game had more enemy variety and more and better gameplay elements, I can still recommend this game to anyone, as long as they can handle the story, which will stay on my mind for years to come.

One thought on “Bioshock Infinite Review”