We’ve all played out the canon story of Dragon Ball Z a million times in video games over the years, and apparently Bandai Namco is getting just as tired of the monotony as we are.

The new current-gen Dragon Ball Z game, Xenoverse, made its first appearance at E3 where they showed a new character who matches the description of a Saiyan. Not only does his spiky hair and scanner speak of his heritage, but apparently he can go Super Saiyan, a trait only the most powerful Saiyans posses.

He doesn’t appear to be an antagonist like the Super Saiyan Broly, and is seen in the game interacting normally with the Z fighters. Most likely, he is a supporter of good ol’ Goku and the rest of the gang. It is currently unknown where he came from or if he is even a full-blooded saiyan. Developers at Bandai Namco even stated, “After all these years, have we finally found another survivor to Planet Vegeta’s destruction? This question remains unanswered.” 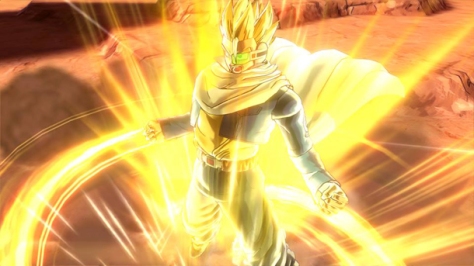 Xenoverse itself will come out on both current and previous gen Xbox and PlayStation consoles, although when it will be released has yet to be specified.

I’d always been intrigued by survivors to the destruction of Planet Vegeta, especially when Vegeta’s brother Tarble was revealed in a recent movie, so this might be just what the doctor ordered. This transformation doesn’t exactly mean that he is a pure blooded saiyan as Earth-born half-saiyans like Gohan and even humans with just a drop of Saiyan blood (as seen in the MMO) are able to make the transformation.This just means that there is a new twist on things that may or may not be twisting the canon story of DBZ in new and exciting ways!

2 thoughts on “Another Super Saiyan?”