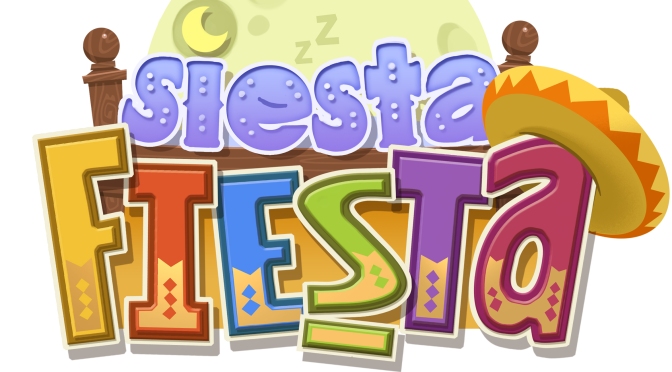 A PARTY WITHOUT THE SNOOZE BUTTON

Sometimes people are only interested in the big video game characters: Mario, Link, Master Chief, Sora, etc. Smaller games and characters are sometimes overlooked by these first-party only players as well as the scores of shovel ware and iOS games flooding the industry. It’s easy to lose track of all these games and miss a diamond in the eShop world. Siesta Fiesta is one of those games that should not be missed.

Mojo Bones, the developer of Siesta Fiesta, is an up-and-coming group based out of the United Kingdom. The company has made several successful mobile games, including The Voyage, The Curse, and Tongue Tied, for iOS and Android. This is Mojo Bones’ first attempt at a handheld game, versus one for smartphones.

Siesta Fiesta follows a snoozing character, Siesta, who is taken on a unique adventure throughout Fiestaville: the home of the Fiestas. By using Siesta’s bed, you are able to bounce, boost, and reflect across Fiestaville’s eight dynamic regions. 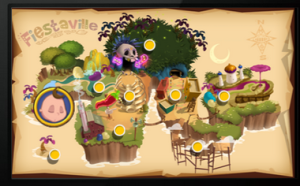 This story is nice and cute, but is limited at that. I’m not trying to downplay the storyline concept at all, but it is not the main focus of the game; it is there to merely give you context for the setting, gameplay, and mechanics.

While the story may be bland, the graphics and visuals for each region are both unique and captivating. Regions range from Fiesta Town (Western), to Neon Cove (Fluorescence), to 1000 Feet Festival (Winter) among others. Furthermore, I was thoroughly impressed by how clean and polished the game looks. For a $5.99 downloadable eShop game, it ranks very high compared to others in this category.

Each region has six to ten levels. The stages are fairly quick, lasting usually about five minutes. With this, each world offers an added layer to the complexity of the game. The first few levels introduce some mechanics to make the player comfortable, while later levels offer unique challenges that mesh all previous gaming styles together.

The actual gameplay follows a Breakout style of gaming, but with an added twist of having various types of levels. Some levels are side-scrollers while others are fixed but have time limitations. To make the game more dynamic, there are numerous types of power-ups, various forms of blocks to hits, and scores of hazards that can either hurt or inconsequently help you through the level. 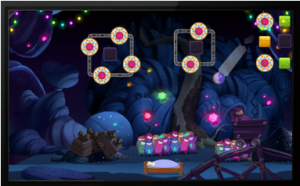 The bottom screen shows a gauge where your points are accumulated and visualize how close you are to winning a specific medal. With each level you’re able to get a Bronze, Silver, or Gold medal upon it’s completion. In addition, the bottom screen shows five Fiestas that will give you five chances to miss the ball and continue the level. Though five might seem a bit excessive, trying to reach the Gold medal involves some risk and a few opportunities for success. I’ll be honest–I thought I was doing well and often got Bronze, seldom Silver, and not a single Gold for the first go-around. It seems that if you want the Gold you need to earn it; precision playing, on point hits, and no rooms for error.

One feature that caught me off guard was how much detail the game employs with the regions’ themes. For instance, in the first level Siesta is treated to a sunrise. Instead of a mere rising sun in the background, the level’s visuals transform, casting a shadow on the bed and blocks. This type of insight and detail is one of many examples of how the game deliberately blends the themes of the regions to create a positive experience for the players.

Siesta Fiesta also makes subtle and conscious use of the 3D effect on the Nintendo 3DS. Whether it’s having water splashed and slowly dribble down the screen or having confetti thrown into the air, each is done well and not too often to make it distracting for the player. This is very much appreciated since I especially don’t want things thrown into a game for no reason other than to improve my gaming experience. 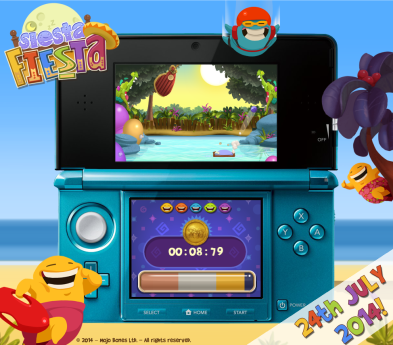 I was pleasantly surprised by how engaging the game became. The first region offered nothing special–or so I thought–but the first boss level showed how fun and captivating the game could be. I found myself playing for longer stretches of time than I was expecting, which I was not at all upset about. Even if you only have ten minutes to play, you’ll get enough enjoyment from a level or two to draw you back into the game. The excitement of trying to figure out how to maximize your score while minimizing the hazards offers great replay value and challenges players to get the Gold. For only $5.99, Siesta Fiesta is a great game for any type of gamer.

One thought on “Siesta Fiesta Review”