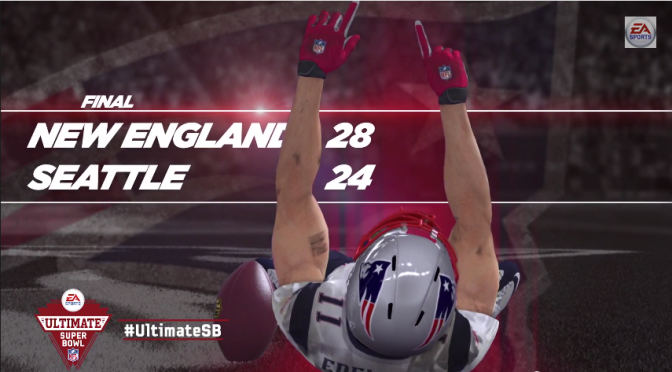 As is tradition in the week leading up to the Super Bowl, EA Sports’ put Madden 15 to the task of predicting the outcome of the upcoming NFL title game. This year’s participants, the New England Patriots and the Seattle Seahawks, squared off in the simulation on the Xbox One.

Using a momentum-turning pick six and a forceful ground attack led by Marshawn Lynch, the Seahawks looked to reclaim their title by jumping out to a 17-14 lead at halftime despite a pair of Tom Brady touchdown passes.

However, much like during the Patriots’ glorious mid-2000s seasons, Brady did what Brady does and he struck in the final seconds on a touchdown toss to speedy Julian Edelman to secure the win and take the air out of Seattle’s sails. The veteran quarterback collected Most Valuable Player honors and his fourth Super Bowl ring with 335 yards and four touchdowns in the 28-24 victory.

EA Sports ran the simulation on an Xbox One with rosters updated following the AFC and NFC championship games.

According to a 2014 article from the Huffington Post, the Official Madden Prediction game has successfully predicted the winner eight of the last 11 years. However, last season they called for a 31-28 Denver Broncos win and that certainly didn’t come to fruition.

The real Patriots and Seahawks will kick off in Super Bowl XLIX at 6:30 p.m. ET on Sunday.

I wouldn’t be surprised if the Patriots win by four on a last-second touchdown. Both teams are juggernauts of their own rights (Seattle going for the back-to-back title, Patriots playing in their, like, 71st Super Bowl in the new millenium) and both present a challenge to the other. Although Madden gets it right more often than not, they were really, really far off last year. I wonder if the commercials during the Madden Super Bowl were any good this year.

Brian Hoerst thinks Seattle is going to win, but it doesn’t matter because it’s still hockey season. Follow him on Twitter.