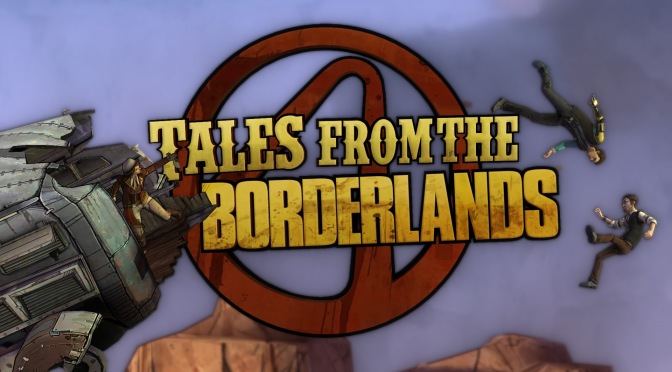 I’m both a Borderlands fan and a Telltale Games fan. When Tales from the Borderlands was first announced, though, I was the biggest skeptic among my friends. “A Borderlands game that isn’t a shooter? A Telltale game set on Pandora?” However, after two episodes, I find myself feeling foolish for ever doubting the premise.

In Episode One: Zer0 Sum, we were introduced to our two protagonists, Rhys and Fiona. Rhys is employed by Hyperion and is trying to work his way up the company ranks after the death of Handsome Jack in Borderlands 2. Fiona and her sister Sasha are home-grown con artists, and through some shady business deals involving a fake Vault Key, Rhys and his partner Vaughn find themselves working together with Fiona and Sasha. At the end of Episode One, the team discovers an underground Atlas base and a mysterious mechanism that introduces them to the Gortys Project. This is where Episode Two: Atlas Mugged picks up.

Rhys and Fiona are still being held captive, and the story takes place through flashbacks as they attempt to explain to their masked captor exactly how they found the Gortys Project and what it is. They are making their way to an unknown destination, being forced along by the masked man with the gun.

Through the flashbacks, both Fiona and Rhys become playable. From scooping a man’s eye out with a spork (“Oh hey, it’s a spoon AND a fork. Ha! How ’bout that?”) to fist-bumping a Loader Bot, there are plenty of hilarious moments in this episode. After Fiona and Rhys combine two mysterious mechanical pieces, a map of Pandora is holographically displayed, and the Gortys Project is discussed. Oh, and suddenly a familiar face is thrown into the mix. It’s Handsome Jack, though as you may recall, he’s not actually alive. Let’s just say his situation is interesting, and I’m excited to see where Telltale takes it in future episodes.

The team discovers that they must head to Old Haven to find a hidden Atlas base, and from that point on, the episode began to feel a little stretched out. After an awesome chase scene involving the Hyperion moon base and a rakk hive, Rhys and Vaughn become separated from Fiona and Sasha, and the typical video game trope of filler content comes into play. While I felt like all the scenes in the episode were useful, by the end of the episode I couldn’t help but feel that half of it could’ve been cut out. However, that would’ve been too easy, and it really gave Tales a “typical video game” feel, something I’ve never felt while playing a Telltale game before.

The point-and-click adventure game fundamentals are still present, with environments to be explored and interactions to be had. However, the environments in this episode did feel a little more restrictive than the first episode. There wasn’t as much to explore, and most items you interacted with were actually the items you needed to proceed. I also noticed a lack of use of Rhys’ ECHO Eye implant in the environments until the second half of the episode.

The voice acting, sound, and engine performance of this episode continued the strong start of the first episode. The introduction of familiar Borderlands characters into this story is a great way to make it seem more and more like a real Borderlands experience, minus the guns. However, hearing a particular newly-introduced character speak for more than a minute is cringe-worthy. There’s a reason that character only had a few lines of dialogue across the entirety of Borderlands and Borderlands 2, Telltale. Please, make it stop.

Tales from the Borderlands Episode Two: Atlas Mugged does a great job of continuing the story of Rhys, Vaughn, Fiona, and Sasha. It opens strong and finishes strong, but everything in between felt a bit like typical video game filler. While this does allow Telltale to introduce some characters from the Borderlands catalogue, it comes off as padding what would otherwise be a one-hour episode. The classic Borderlands humor continues to permeate through every moment, though, meaning that even content designed to stretch the episode length is comedic, entertaining, and worth experiencing. If Telltale Games keeps this up, Tales from the Borderlands could end up being my favorite Telltale series.

Matt Middleton is an associate writer for MONG. He is also a lover of Mexican cuisine, How I Met Your Mother, and fun video games. Follow him on Twitter for a daily dose of song lyrics and pictures and thoughts about the aforementioned food and video games.