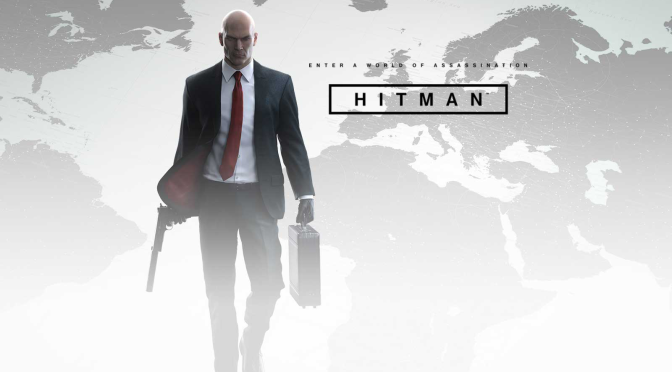 When I wrote about the beta, I said that Hitman could “return the franchise to its former glory.” So has it?

After a nearly four year break, Agent 47 returns to express his love for murder in the city of love. But first players are shown 47’s entrance into the ICA almost 20 years prior. The two tutorial missions that take place in the training facility do a good job of explaining the mechanics to newcomers, or as a reminder to people who have not touched a Hitman game in years. The levels are small in scope, which prevents them from being too overwhelming. The first time through the first mission is a bit of a drag since it walks the player step by step and never allows them to explore. (This slow pace is also worsened by the fact that I already did this mission in the beta). It eventually opens up and lets the player go about it their own way but it becomes clear that the ways to clear the missions are very limited.

After the completion of the intro, the game fast forwards 20 years and throws Agent 47 into a fashion show being held in Paris. This is where the real meat of the game begins. The Showstopper, the one mission held in Paris so far, is significantly larger than the tutorial level and is probably the largest Hitman level to date. My first time through, I spent an hour just exploring the location, poking, prodding, and murdering my way through the mansion. When I played the mission again, I realized I had missed several rooms and noticed interactable objects that I had passed by before. The scale of the level is a bit staggering, and almost makes up for the fact that there is almost no other content.

Past Hitman games felt a little clunky when it came to movement controls. Precise movement was never a necessity, but it is a nice thing to have. For all its faults, Hitman: Absolution succeeded in this area. Thankfully, that degree of control made its way into this game. The shooting feels smooth, so a head shot can be pulled off with ease, and the cover system allows for easy stealth when disguises will not work.

Speaking of disguises, the disguise system of Hitman is the best of the series. Hitman 2: Silent Assassin and especially Hitman: Absolution made disguises feel kind of useless, whereas Hitman: Blood Money made disguises almost flawless. Hitman strikes a balance by allowing only some people to see through disguises and limiting a certain disguise’s usefulness in any given area. Now, guards do not automatically open fire when 47 enters an area where a disguise does not work. Instead, they will escort him out of the area peacefully. The tweaks make for a significantly better experience that past games struggled with.

Each mission has a list of challenges that can be completed, and the Paris level has something called “Mastery.” Mastery goes up by completing challenges and unlocks new gear or starting locations that can be used in the map. I suggest not looking at the challenges until at least one playthrough of the level, as they spoil some of the ways to assassinate the targets. These do provide some incentive to keep replaying, and I will continue to do so, but I imagine that it will not be enough for some players. My level of enjoyment does decrease slightly with each replay, but I am still having fun.

Additionally, there are three other modes: Contracts, Escalation, and Elusive Targets. Contracts allows players to mark a target (of which there are dozens in each of the three missions), kill said target with a certain weapon and/or in a certain disguise, and upload it so that other players can try to replicate the results or do it better. Contracts first appeared in Hitman: Absolution and I feel the same way about the mode as I did of its original appearance: it’s okay. Most of the non-player characters that can be targeted do not have any sort of special behavior, so most of the assassinations amount to “shoot/stab/explode this dude and run to the nearest exit as fast as possible.” Escalation is a new mode, and I enjoy it quite a bit. At first, it’s a simple assassination, but then additional objectives are stacked on one another up to five times. For example, the first one tasks the player with killing a general with a pistol. The next time through, the objective is to do that and also break into a safe. Even though it strips the levels of their experimentation, the level of challenge required to complete the objectives makes up for it. However, I do dislike the fact that saving is disabled. Losing 20 minutes of progress because I strangled a dude instead of shooting him in the face is frustrating.

The Elusive Target mode has yet to be available; when it is unlocked, the target will be available for a limited amount of time. Apparently, there will be exclusive rewards for killing these targets, so anyone who plans on waiting for the entire game to be released may have content unobtainable. It feels really disgusting that I am able to get more stuff just because I paid earlier than other people. Maybe there will be an alternate way to acquire whatever rewards there will be, but I am not too happy about the approach IO Interactive is taking with this.

PlayStation 4 owners get access to exclusive targets called the Sarajevo Six. One target will be released with each location, and this month it was a man known simply as The Director. The description for this set of targets makes it seem like it includes some additional story, when in reality it is just a glorified Contracts mission. Platform exclusive content sucks no matter what, but this one is underwhelming and barely worth the time.

Hitman fails to stun when it comes to graphics. It all looks fine, nothing awful, but nothing impressive. However, Agent 47 does develop some subtle wrinkles after the 20 year time jump, which I thought was neat. The mansion is the first mansion setting in the series to feel and look like the living space of a billionaire. It looks beautiful, elegant, and it is massive. Performance wise, the game stutters every once in awhile when going into a large crowd. For whatever reason, it does not happen every time. The frame rate can be locked at 30 for a consistent performance, or unlocked for a higher cap but greater inconsistency. I left it unlocked, but the option to toggle it is a nice inclusion.

I do think that this game is a fantastic successor to Hitman: Blood Money and if the levels continue to be this large and have as much variety as The Showstopper, Hitman will become the best in the series. But right now there is a massive hinderance: the server connection. Hitman is basically an always online experience. Online and offline saves are kept separate, and some content cannot be accessed without a connection. I can understand why Contracts, Escalation, and Elusive Targets require a connection, as they are all meant to be updated constantly. But locking saves behind it and booting players from story missions when they lose connection is ridiculous. On top of that, nearly a week after launch, and there are still times when I cannot connect for a good hour or so. The load times in the game are ridiculously long, loading into a new location takes 60 seconds and loading a save is just as long, and apparently that is because of poor server performance. Hopefully this will be fixed soon, but the fact it has yet to be solved is really annoying.

Hitman hits all of the good points of a Hitman game: large scale, variety of options, great controls, a balanced disguise system, yet the server performance severely negates a lot of that. Hopefully this will change for future episodes.