Agent 47 is spending his summer vacation by doing what he does best: murder unsuspecting people. This time, he’s returning to some familiar locations.

The Summer Bonus Episode is a bit different from previous Hitman episodes. Instead of offering a brand new location, this episode offers two new missions in two previous locations: Sapienza and Marrakesh. The Sapienza mission, titled “The Icon” requires 47 to force a movie director to step down…permanently. “A House Built on Sand”, set in Marrakesh, focuses on two businessmen that are about to make a deal their superiors are not too happy about. 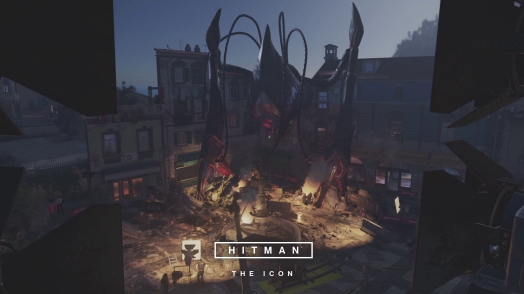 “The Icon” is the most interesting of the two missions, as it sees the plaza section of Sapienza turned into a movie set. In addition, the director/movie star/target is inside of an Iron Man like suit that is movie accurate. This means that the target is bulletproof, so some creativity is required. Thankfully, several entertaining ways to eliminate him are provided. Since it takes place over a portion of the Sapienza map, the mission does feel small  in scale. It does not provide as much replay value as the other missions, but I had fun playing it two or three times.

Marrakesh once again is the weaker part of the experience. “A House Built on Sand” does not significantly modify the map like “The Icon” does. The riot from “A Gilded Cage” is gone, the mission takes place at night, and the targets have unique behaviors. Beyond that, it still feels like the Marrakesh map. It utilizes the marketplace area that I think is underused in the previous mission, but beyond that I think it is rather average. I enjoyed the first time through, but I got about halfway in a second attempt and stopped. I think that if the Marrakesh map got the makeover and Sapienza had remained mostly the same, it would provide a slightly better experience.

Both missions provide a decent amount of fun for a bit, then peter out faster than the previous missions. I expected this smaller scale experience, so I was not disappointed at all. Also, this mission has yet to be released to players who pay for the game episode by episode. A third bonus mission will hit at some point in the near future, then all three will be packaged up and sold for the traditional $9.99 price point. Assuming the third mission is of the same quality as these two, that price seems reasonable.