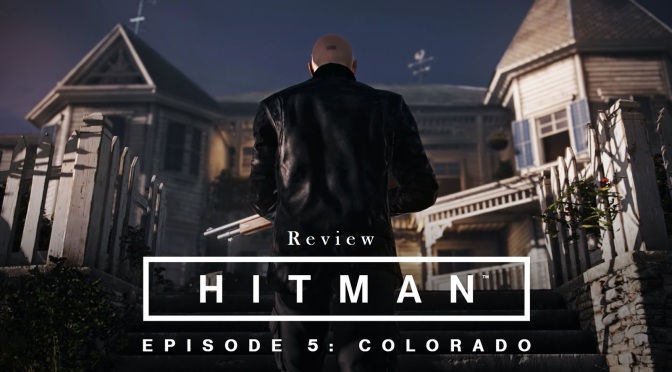 Agent 47 finally makes it to the ol’ US of A, and has the largest target count to date. As a result, this episode favors quantity over quality

Hitman Episode 5 moves the series to a more quaint setting, as opposed to the colorful coastal town of Sapienza or the majestic Himmapan luxury hotel. A decrepit, rustic farm in Colorado is the setting this time. It certainly is not as pretty as the aforementioned settings, but it is visually unique, and adds to the diversity of settings. It does feel a bit smaller than most other maps, but that may be because it’s packed full of junk at every corner. See, this farm is not just a farm, it also serves as the makeshift headquarters of a private militia. All of the junk spread around makes sense within that concept, but it makes navigating the map a pain sometimes.

Navigating the map is also made difficult in another fashion, but it’s actually a smart decision that increases the tension. In other episodes, there were plenty of spaces that lacked any sort of security. Since this farm is occupied only by a militia, almost everyone is armed to the teeth. Getting discovered is almost certainly a death sentence, so being cautious is required. This dynamic makes the map feel different compared to the others.

The map is not the only unique aspect of this episode; unlike the past four episodes, the main mission features four targets instead of the usual two. As I alluded to before, this impacts the quality of the individual targets in favor of the quantity. I do not think that is necessarily bad, as my individual playthroughs were some of the longest I have done. So even though I have only played through the main mission three times, I would say it took the same amount of time as my first four or five playthroughs of any of the other missions. However, I found a lack of interesting interactions after my third playthrough.

There is a slight difference from this episode to Episode 3. In Episode 3, there was plenty of other interactions I had yet to discover, but I did not want to. I want to keep playing Episode 5, but there are no interesting ways left to complete the mission. It’s easily the least replayable of all the main episodes.

The episode also has the most story content of any other episode. Instead of a single cutscene at the end, there is a linear ending to the episode. Instead of simply making a break for the various exit routes, there is a little interaction that triggers at the end. It was a nice addition at first, but it must be done every single time the mission is played. I respect the idea, but I wish there was some alternate mode that allowed subsequent playthroughs to omit the sequence.

Episode 5 is the most that IO Interactive has experimented with the structure of an episode, which affects the episode in positive and negative ways. It provides plenty of fun for the first couple runs, but the returns start diminishing quickly. Overall, I like it plenty, and respect the experimental nature of it, but it’s on the lower end of episodes. Next episode will serve as the “season finale” and will hopefully provide plenty of surprises.