After spending some time with the World of Final Fantasy Dungeon Demo now available on the PlayStation Store, we are ready to share with you a few of our early impressions of Square Enix’s newest Final Fantasy game.

This week, Square Enix released a playable demo on the PlayStation Store for its newest game, World of Final Fantasy. It seems that even amongst some of the most die-hard Final Fantasy fans, this PlayStation exclusive remains almost completely unknown (or doomed to obscurity in the face of Final Fantasy XV’s looming shadow). Still, there’s a full game to appreciate on its way to release next week, and this demo gave us a little taste of what to expect.

After a very short tutorial on the game’s basic controls, I was thrust into an area without any context for why or what to do. After fidgeting around with main characters Reynn and Lann’s Liliken and Jiant forms without much guidance for why it was relevant, I jogged my chibi chocobo over to the nearest NPC. After hearing a brief line of voiced dialogue, I took the item this unfamiliar NPC offered me and carried on toward the next, this time one that I recognized. It was Final Fantasy XIII’s Lightning. Again, she briefly spoke and gave me an item.

Across the entire map available in the demo, this process continued over and over, sometimes with stars of hugely popular Final Fantasy titles, and other times with more peripheral ones. While it was exciting to see some of the characters I’ve known and loved, our interactions felt shallow, like these prominent characters had been sequestered to the most mundane NPC’s of their respective games. For a game that’s intended to be a celebration of Final Fantasy’s legacy, this aspect of the demo almost felt like a bastardization of it. Reynn and Lann didn’t even get any screen time for an ounce of character development. But with the story and characters getting not so much as glossed over in the demo, I’ll have to hold judgment for these aspects for the game’s complete release.

Where the demo’s attention seemed to be focused was on the game’s combat, which has some exciting features. Those fond of Final Fantasy’s earlier Active Time Battle System will feel comfortable here. The order of combat plays out based on each combatants speed, which is measured by a gauge in the screen’s lower-right corner. When it comes time for Lann, Reynn, or one of their respective Mirages to fight, a list of potential abilities open-up based on the combinations of units you’ve prepared (or stacked) prior to entering the arena. Taking advantage of enemy weaknesses and a healthy dose of supportive spells keeps the party alive, just like RPG veterans can expect. 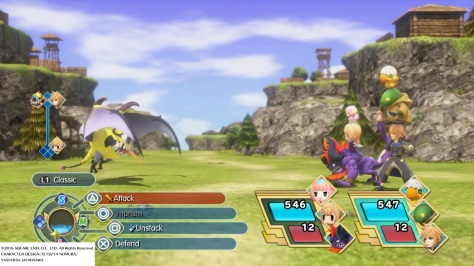 Fans of Final Fantasy’s summoning system can also expect something similar here. Although it was limited to only one type, a Champion was available for my summoning needs. Final Fantasy X’s Tidus must have befriended Reynn and Lann at some point previous to the events of the demo because upon selecting him, a stylish cinematic plays out, displaying his (or his father’s?) patented Jecht Shot on one enemy of choice. I have to admit that even as someone who finds Tidus irritating, this was an exciting scene during the one hour demo, and I cannot wait to see who else becomes available as a Champion in the game’s full version. As far as the game’s art style is concerned, it’s certain to be a divisive component amongst gamers. For me, I’ve found the Chibi designs of past favorite characters to be utterly charming, but there are many out there for whom “cute” does not compute. Listen to Tama’s speech pattern for a few seconds and you’ll start to understand that the adorable factor in this title has been cranked to 11. However, Reynn and Lann’s Jiant forms are a nice contrast to the rest of the world, somewhat reminiscent of character designs from Kingdom Hearts. Although the demo did not in any way suggest it, their alternative art-style sets them as outsiders to the rest of the world, and possibly even hints at their stories having darker paths.

During the demo, I also captured various different creatures (Mirages) that I battled across the map and added them to my squad. World of Final Fantasy allows players to place captured Mirages in battle formations based on how they’re stacked atop (or beneath) Reynn and Lann. These combinations offer perks such as different elemental spells or more varied stats. However, after the demo, it remains unclear if the game provides a more intuitive way of discovering what these variances are without trial and error. Additionally, it seems that stacking characters too high can be risky, as they can be toppled and stunned for a time. While this is an intriguing way of balancing, I found no way of minimizing this risk, and it was unclear to me if the risk was worth the reward of having a higher powered tower of Mirages. Again, it seems trial and error is the only answer, which might be an overbearing task when faced with the final release’s boasted 200 total Mirages available for capture.

With all of that said, I still had a lot of fun finding and forming my battle squad. At the end of each battle, I saw my squad growing with new Mirage additions that made me feel I was truly becoming a reckoning force. Although I wasn’t sure what I was doing, it didn’t seem to matter all that much.

The demo ends with an area that very nearly has the words “boss battle” plastered on it, and four treasure chests that do not hold items, but gameplay montages from the game’s full version. It was an interesting choice to provide these trailers in such a fashion, but it didn’t ultimately add much to the overall experience. At the end, I proceeded to the boss battle, and after demolishing the boss, was greeted with a “thank you” screen and a short story trailer.

What we’re left with is an experience that hardly displays what Final Fantasy fans expect to find in a game that is supposed to be a revisiting of past favorites. Without any context for the plot, a hint of character development, or some guidance for how the game’s core mechanics should operate, there’s not much to instill confidence in the final product for those on the fence. Still, I’ve seen enough where I’m more interested in receiving a full tutorial on the Mirage combination system and on how to best optimize Reynn and Lann to meet basic RPG roles. I also remain certain that there is some sort of story here, and instead of convoluting the demo with its intricacies, Square Enix decided to leave it to the full version. I can hope!

Look forward to our full review of World of Final Fantasy in the coming weeks.

Jordan Loeffler is Editor in Chief for MONG. He firmly believes World of Final Fantasy will be the stronger Final Fantasy game to release this year. You can also follow him on IGN and on Twitter.