If you’re a gamer like me, you sometimes may find yourself dreaming of the high life. Having your butler fetch you a Mountain Dew while you play video games on your 100 inch TV. For most of us common folk that’s about as realistic as any recent Call Of Duty game. So if the gaming life of the rich sparks your interest or if you have a million dollars to spare on all the stuff listed below then this is the article for you.

Kicking off the list is the, dare I say, most affordable thing on this list. For a mere 250 dollars you could have picked up a gold, carbon fiber, glossy finished controller from ColorWare. I say “you could” because only 100 were made and they have already been sold. This bad boy comes with a carrying case, a set of four paddles, a set of six thumbsticks, two D-pads, a USB cable, AA batteries and a manual. Some may say this is over the top, but hey, who doesn’t want a controller with gold in it? For the price of this one controller, you could have bought four brand new controllers.

Some people have blue consoles, some have black, and some have 220 grams of 9 carat rose gold-plated consoles made in Italy, sold by a Dubai based company called Jumbo Electronics. For the few that want the latter, you better have a large sum of cash and lots of patience, it takes months to make and ship. For $13,600 you could get 50 new Xbox One’s and three carbon fiber controllers.

Are you tired of driving your Ferrari around your private track and want something more climate controlled? Then the Mach 4 is for you! For a small price of $25,000 you can drive in comfort and style from inside your mansion! Included are four Xbox 360’s, three 37 inch tv’s, Bose surround sound stereos, a fan that simulates air flow, a steering wheel that vibrates via car movement, pedals, and three copies of Forza 3. 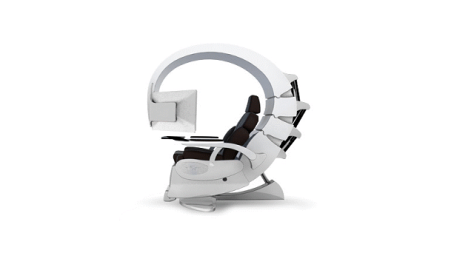 The Emperor Reigns supreme among all other gaming chairs. For almost $45,000 dollars you can get one of your own. This big girl comes outfitted with three 24 inch screens to offer a full view. The tail lifts up and down for easy manoeuvrability. Your ears are treated to THX surround sound, and your butt is treated to a motorized adjustable seat. It has its own air filtration system to circulate stale air and give you fresh air, however that’s not even the crazy part…The Emperor 200 has its own light therapy system to feed vitamin D to those of you who can’t just go outside! For $45,000 you could buy one VRX Mach 4 Racing Simulator, one rose gold Xbox, two Elite Titan Controllers, 1,322 Mountain Dews, and 1,677 bags of Doritos.

You may be wondering, “what’s the picture of?”. Well my friends those are computer towers made of pure gold and pure platinum, embedded with diamonds. The Zeus Jupiter from Zeus Computers tops off our list with something rather unbelievable, a computer that’s three quarters of a million dollars! This baby has high end components such as 3Ghx Core2Duo CPU, two gigs of RAM, a terabyte of storage, and a 256MB GeForce 8400GS graphics card. For those of you who don’t speak geek, that pretty much just means it’s good! Your ears are treated to high end Onkyo speakers and you get a choice between HD-DVD or Blu-ray drives.

Jeremy LeLaCheur is an Associate Writer at MONG and excels at loving his mom and at video games with a dash of sarcasm and charisma.