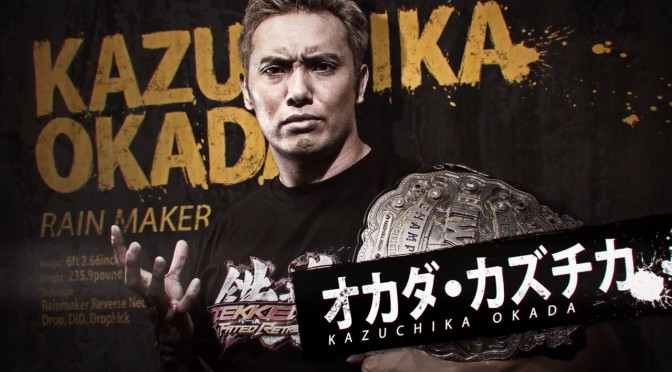 Professional wrestling and fighting games have shared a common link, from the various wrestling based moves and characters which often appear in many fighting games. Zangief and R. Mika from Street Fighter, King from Tekken, and El Blaze from Virtua Fighter are just some whose origins lie in the squared circle. Now Tekken 7 and New Japan Pro Wrestling are set to take that commonality to a new level with a series of cross promotion.

Tekken 7 will feature alternate costumes displaying the attire of popular NJPW wrestling stables, Bullet Club and Chaos. Players can unlock the special content by playing a specific number of times from January 23rd to February 22nd. The crossover extends into the real world, with T-shirts being made for purchase as well. In addition, Tekken character King will have a costume based upon NJPW Heavyweight champion, Kazuchika Okada. Players can also choose to switch King’s Rage Art in the game over to “The Rainmaker”, Okada’s popular finishing move.

For a look at the cross-promotion in action, check out the video below.

I haven’t seen a lot of NJPW, but I have seen Okada wrestle and he is great in the ring. Easily one of the best drop-kicks I have seen in the business. The cross-promotion with NJPW is a cool idea, and it will be interesting to see if it happens in the West as well. Now if Namco could just announce a release date for Tekken 7 on consoles.