THE SOUL OF A MECH

Deck 13’s latest release, The Surge, creates a grim dystopian future where humanity’s choices places it at the brink of extinction. Through challenging gameplay and grinding level progression, players can enjoy a Bloodborne-like game, with mechs, in this survival-adventure game.

Through the opening sequence of The Surge, players are given a brief glimpse of the future – famine, overpopulation, global warming – rapidly degrade the world. The  “big bad” company swoops in to save the day, but in predictable sci-fi tropes, things eventually go awry. Warren, the protagonist that players control, joins the company right before this debauchery occurs. As part of his preliminary orientation, Warren assimilates with a mech in a gruesomely gorgeous cutscene. The mech that is literally soldered onto Warren becomes pivotal in the gameplay and story. Players will eventually encounter small bits of story to push Warren forward into the world, but more seasoned sci-fi players will be able to predict most of the beats.

Even with some typical science-fiction arcs, there is an incredible amount of environmental storytelling. Listening to beautifully acted audio logs and reading eerie messages written throughout the levels gradually and excitingly present the chaos that transpired. These moments in particular captured my interest in the first dozen or so hours, since the actual aesthetic of the game was bland. The visual fidelity was fine, but, like the story, followed typical locations to explore from a typical sci-fi adventure and offered little variety. 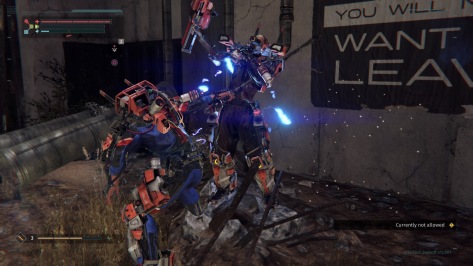 The Surge’s gameplay follows the Soul’s formula of collecting experience while you traverse through the world, battle various enemies, and find some valuable items. Once you’re satisfied with the loot, you can cash in all you found and upgrade your gear through the various Operation Bases. Similar to Deck 13’s previous game, Lords of the Fallen, there is a multiplier mechanic that grants more earnings the longer you go in between visits to an Operation Base. The longer you fight and collect, the higher the multiplier. This high stakes level of gameplay may have given me the most stress in a game in quite some time. I’m constantly on edge that I’ll make one mistake and lose all my earnings – giving me even more excitement to continue. 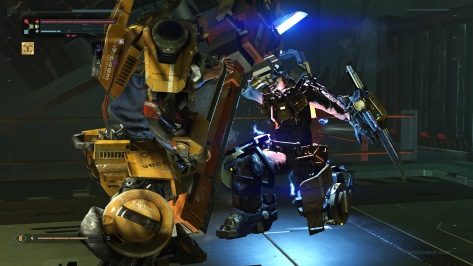 The central mechanic for The Surge though are the combat elements. The fights are not terribly difficult, but cutting through and dismembering enemies is wonderfully satisfying. Mapping an enemy’s move set looking for an opening is fun and those slow-motion finishing moves are the icing on the mechanical cake. Enemies unfortunately aren’t very intuitive, but make the skirmishes easily manageable. However, failure to survey your surroundings will eventually trap you in a situation that could have been avoided if you planned properly.

Once players have nailed the actual mechanics of meleeing, they can then collect various parts and blueprints to upgrade and modify their exo-suits. I found this to be quite intriguing since it allowed me to focus on specific enemy body parts to earn those corresponding items and blueprints. Though loot seldom appears, it’s an immense rush to finally get upgradeable material to craft my character how I want to play.

The Surge is a great adventure that challenges players to tactfully and woefully engage in the dystopian world. From intriguing environmental storytelling to gruesome scrimmages, the game continues to keep its level of engagement high. Though the actual storyline is a somewhat predictable sci-fi adventure, the solid gameplay and decent RPG-mechanics can appeal to any fan of a Souls-like experience.

4 thoughts on “The Surge Review”