Apparently, it’s the year of alternate-colored consoles. Beyond the recent Game of Thrones, the white PlayStation 4, and the GayStation, French retailer Micromania (a reliable source of leaks) has “dropped the ball” and revealed the coming of a white Xbox One that will be bundled with Sunset Overdrive. 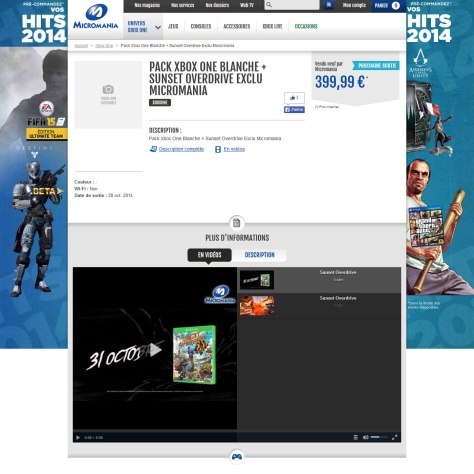 This bundle will be the first instance of a custom Xbox One that will be readily available to the public. The bundle looked like it would run any adopters €399 (roughly $535 USD) and heavily resembles the console given to Microsoft employees. Of course, unlike the Microsoft employee version, the Sunset version won’t sport the “I made this” slogan. 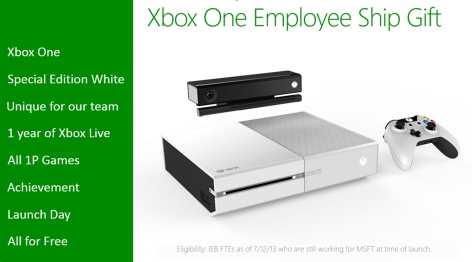 The bundle has since been taken down from the Micromania website.

Why? I can understand bundling a highly hyped game like Sunset Overdrive with console, that’ll move units, but why is it white? That’s such a cop-out in my opinion. If you have seen any videos or information about Sunset, you know that’s a very vivid, highly stylized, and aesthetically powerful game… so why is the console it’s bundled with white? They definitely should have gone with the custom version from SDCC. White is just so boring–as boring as watching a turtle and a snail on sleeping pills race. That’s so boring that I had to make up a comparison that wasn’t very good. It’s awful; Microsoft is dropping the ball big time by not making this system actually look unique. Don’t call me a fanboy either, I think Sony is making a misplay by not doing more with the Destiny bundle too.

Myles K Farrington is one of the MONG Senior Editors sailing the seven internet seas to find all the news you’re jonesin’ for. Keep up with him over on IGN, Twitch, and Twitter as well! Yarr!

3 thoughts on “White Xbox One and Sunset Overdrive Bundle Leaked”