The Endless Debate series continues! This week, Harry and Mike tackle the question as old as video games: Who’s better, Sonic or Mario? For this debate, Mike is on the side of the blue hedgehog, Sonic, and Harry teams up with the plumber, Mario. Who will win this heated debate? Let’s see their arguments:

Mike: Sega Does What Ninten-don’t

Sonic the Hedgehog is unquestionably cooler than a fat plumber who can’t even rescue one princess, but I would take it one step further and say that he is also better than Mario in many other ways as well. Sure, Mario has more good games than Sonic does. Sure, Mario has sold more units than Sonic ever will, and yes, the once proud Ninten-foe now lies humbled at the feet of his new masters, but none of that matters when it comes to character. Sonic is better than Mario and here’s why.

Sonic had a good TV show. 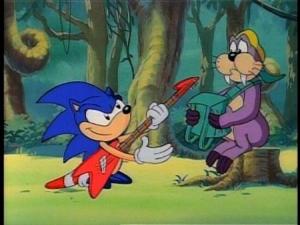 Super Mario Brothers: Super Show is one of the most terrifying things I’ve ever seen in my life, and I’ve seen Super Mario Brothers: The Movie. Live-action Mario is just not something that needs to exist and the story in the show is as inane as it is ridiculous. Sonic the Hedgehog, however, can proudly boast one of the greatest Saturday morning cartoons (R.I.P.) of all-time: Sonic the Hedgehog. This show, which aired for one glorious season in 1993, set up Sonic as a freedom-fighter, battling the forces of Dr. Eggman in a dystopian fantasy world. The supporting cast was amazing, it touched on some mature themes, and it even explained some things from the games, like why there are robat animals everywhere. Both shows are on Netflix, go watch them so you can see how right I am. Suck on that, pizzanos.

Sonic and Mario are both platforming games. The main difference is that Sonic goes fast and has awesome moves, and Mario plods along like a million-year-old man. The original Sonic the Hedgehog and Super Mario Bros. 3 are very similar, but you can burn through Sonic levels way faster, which is great for today’s shortened attention spans. Does Mario do loops? No. Does Mario fight killer whales? No. Does Mario go through crazy underground dungeons full of wacky monsters? Well, yes, but his are boring, slow, and far too easy. Sonic is a true testament to fun and skill and Mario, while good, is still just the giant whose shoulders Sega stood on to make the better mascot.

Sonic the Hedgehog’s favorite food is chili dogs. Mario goes around eating garbage that falls out of rocks, chasing promises of cake (which we all know is just a metaphor) and companionship. Sonic, on the other hand, does not stop to mess around like that. He saves the day and only then does he ingest this most glorious of feasts, the chili dog. Chili dogs are basically the greatest food ever made. If I could only eat one thing for the rest of my life it would be Skyline cheese coneys, five of them, for every meal. Some of the greatest culinary treasures ever birthed into the world came from Mario’s homeland (pretend videogame Italy), yet he still chooses to make a fool of himself by eating trash.

Sonic is cool and has an attitude, Mario is like your dad. Nobody wants to hang out with a creepy-mustache wearing, blue-collar mass murderer. Everyone wants to chill with an anthropomorphic, forest creature. Sonic is leading a revolution and freeing his trapped friends, Mario just kills cute, innocent turtles and bees all day. Wipe those reptile guts off your shoes and go unclog my toilet you awful, boring man.

Mario is without a doubt the most recognizable video game character in existence. No matter what country you’re from, what language you speak, or what “type” of person you are, you know Mario. When Mike suggested the question “Who’s better, Sonic or Mario”, my immediate thought was “Well this is going to be awkward when we both want to pick Mario”. To my surprise, he picked Sonic, but that made my life easier. Mario is the best and here’s why:

Mario Wears More Than Just One Hat (Literally and Figuratively)

Mario is a jack-of-all-trades! Not only is he a plumber, but he’s a doctor, a painter, explorer, cook, professional athlete (tennis, soccer, golf, racecar driver, just to name a few), composer, and of course, hero. What’s Sonic? A hedgehog. Oh wait, sorry, a blue hedgehog. Not only that, but Mario can take a dinosaur, Yoshi, within seconds of meeting it. Not too shabby.

Something that I’ve always enjoyed about Mario and his crew is that he actually has a recognizable “crew”. Luigi, Peach, Yoshi, Bowser, Bowser Jr., Rosalina, Goombas, Shy Guys, Wario, Waluigi, Toad……the list goes on and on. What’s even better is that these characters even have their own storylines with unique games and storylines. Some that come to mind include Luigi’s Mansion (2001), Wario Land: Super Mario Land 3, Super Princess Peach, Yoshi’s Island DS, as well as the upcoming Captain Toad: Treasure Tracker. If you’re not into these supporting characters’ games, then maybe some spin-off games might be your speed. These games offer players the option of playing as one of the more “primetime” characters or the slew of supporters. The Mario Party series, Super Smash Bros. series, Mario Tennis, and Dance Dance Revolution: Mario Mix are some great examples. Regardless of what type of game you’re interested in, you’re invested in several characters, not just the star character. Sonic has Tails….maybe Knuckles and Shadow too. Not too much of a supporting cast.

I feel like this little quote found online sums up Mario’s diversity: “Mario, an Italian plumber created by Japanese people, who speaks English, and looks like a Mexican” With this funny, witty, and factual statement, we can all see that there’s plenty of backgrounds blended together to create the perfect character. That perfect character – Mario.

Numbers don’t lie: the Mario franchise completely dwarfs the Sonic series in terms of copies sold. Mario has sold 445 million copies, while Sonic has sold a measly 140 million copies. In other words for every 3.17 copies of a Mario series sold, only 1 Sonic game is sold. Those are some big numbers. With so many games sold over decades, the debate is over –  Mario is the clear winner.

So who do you agree with? The blue hedgehog or the Italian plumber. Leave your thoughts below.

Mike Bertrand is an Associate Writer here at MONG. Scary games are totally his jam as evidenced by his Twitter handle (@survivalhorible).

3 thoughts on “The Endless Debate: Sonic Vs Mario”