It’s that time of the month again folks. The time where gamers collectively gather all over the internet to criticize what free games they get this month. So, who plundered the other’s fanboys for all their self-worth and gratification in life? Who was the victor in July? Let’s take a look.

Following last month’s fairly mediocre lineup, that only hardcore goat simulation fans were celebrating, Microsoft has come back in July with another equally stodgy offering. Thus making this the third rather disappointing month in a row for Games with Gold. While I’m personally jazzed for the inclusion of one of my favorite games this year, many pitchfork-armed Xbox gamers have already ransacked comment sections across the internet in fury. 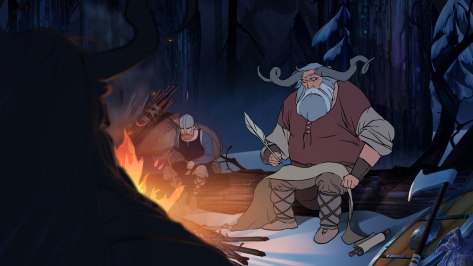 The sequel to Stoic’s 2014 surprise hit, The Banner Saga, The Banner Saga 2 is the highlight of Microsoft’s offering this month. An atmospheric masterwork, The Banner Saga 2 improves on everything its predecessor excelled at: a touching and engrossing narrative, superlative turn-based tactical gameplay, and dispensing a vast range of emotions to consume you as you play and make difficult decisions. A mature story in the vein of Game of Thrones, with gameplay heavily inspired by Final Fantasy Tactics and Shining Force — what’s not to love? Not just a game — The Banner Saga 2 is an experience, full of interesting characters and a beautifully realized world that will suck you in and not let you go until you’ve binged every last drop of content. 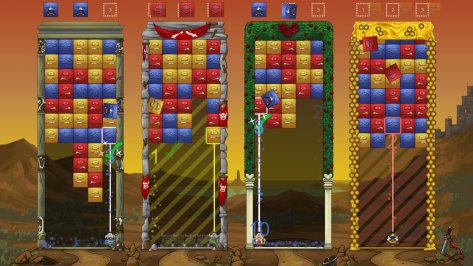 Tumblestone is a casual puzzle and competitive multiplayer game from the creators of The Bridge, and is essentially just another Match-3 game. Yet to release, it’s hard to say much about Tumblestone — other than that it looks pretty third-rate. The only good news for Xbox One gamers is they will be able try Tumblestone for free, while it will cost $24.99 on all other platforms to try this “maddeningly addictive,”…“cerebral puzzle solving experience.” Who knows, Tumblestone could be the next Candy Crush — and I’m not sure if that’s a good or bad thing for Xbox One gamers.

Original Release: Hasn’t released yet, but is set to release July 12th. 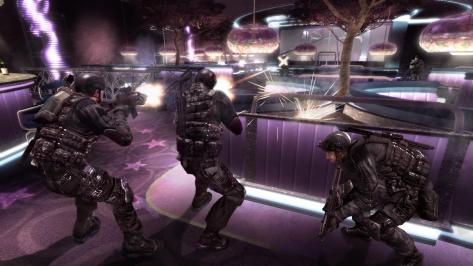 For many Xbox gamers, the best game on offer will send them back to 2006 and back to sin-city. From here they will play as the world’s most elite counter-terrorism unit, and be tasked with saving the world’s sexiest city, Las Vegas, from some punk-ass terrorists. While not as good or groundbreaking as its predecessor, Rainbow Six Vegas 2 still consists of everything that made the first game excellent: a compelling single-player mode, top-notch tactical shooting action, and multiplayer that provides endless amounts of entertainment. A recycling job of one of the best games of the 7th generation — not a bad reputation to have if you ask me. 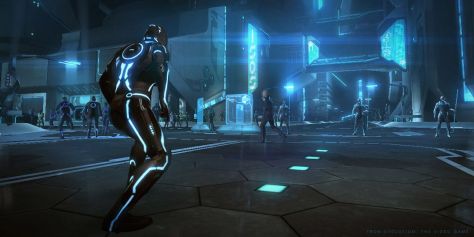 There was little reason to play Tron Evolution in 2010, and even less reason to play it in 2016. Better than most movie licensed games, which isn’t saying much, Tron Evolution was Propaganda Games’ second and last game developed before the studio’s closure, and it’s easy to see why that is the case. A game that entertains, but doesn’t inspire, Tron Evolution is in fact not horrible. However, it’s a game that needn’t be played by anyone — even huge Tron fans could do without it. It’s a repetitive cyberpunk version of Prince of Persia, with a blah single player, and unmemorable multiplayer. Games with Gold Pro Tip: don’t play this one.

Another month, and another AAA game. The end of world must really be near. Following up last month’s blue-ribbon offering is not easy — and alas Sony has failed to reach the same heights it did in June. While July’s offerings still won’t require you to rummage around for your PlayStation 3, or go and dig up your Vita out of the backyard, it will make you happy to own a PlayStation 4.

Saints Row: Gat out of Hell 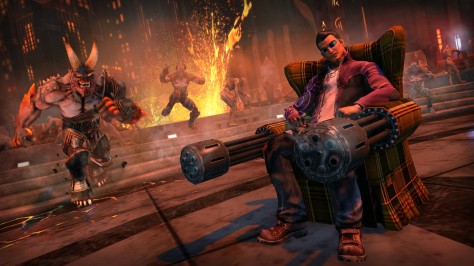 Want to waste a few weekends doing zany and silly stuff that is mildly entertaining? Saints Row: Gat out of Hell is your ga-…I mean standalone expansion. Saints Row IV was a great game. It set a new standard of over-the-top, and was endless, pure, unadulterated fun in an age where games take themselves far too seriously. Gat out of Hell provided the same experience, but in a far smaller and less entertaining dosage. Lets face it — you know it’s going to be a tough month when Sony doesn’t even love you enough to hook you up with something more than stand-alone DLC. 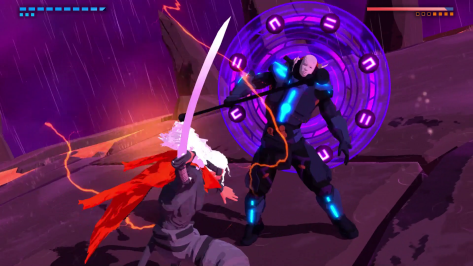 Imagine if Afro Samurai, Jet Set Radio, Transistor, Metal Gear Rising, El Shaddai, and Killer is Dead, all had a baby — that baby is Furi. Even though it has yet to release, Furi is by far the most exciting game being offered by Sony this month. It’s hard to say anything with too much confidence, but Furi looks to contain ultra fast-paced, responsive, and addicting gameplay. In it you beat your enemies by shooting them in bullet hell fashion, and by swordfighting in samurai-like duels. I dare you to say that doesn’t sound awesome.

Original Release: Hasn’t released yet, but is set to release July 5th. 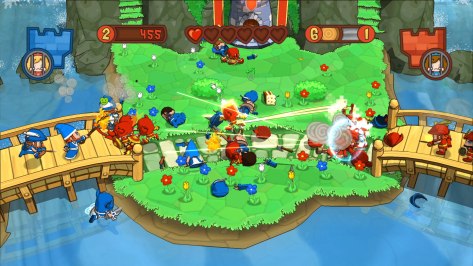 Fat Princess’ charm and sense of humor is second to none. Seriously, what’s more charming and fun than trying to steal another team’s cake-loaded, monstrously gorged, fat princess? Not much I tell you. But, Fat Princess is more than just an absurd premise, it’s a simple, yet incredibly addicting twist to capture-the-flag. It’s safe to say it features some of the best team-based multiplayer to ever grace the PlayStation 3. The stellar presentation and style is just a fat cherry on top.

Call of Juarez: Bound in Blood 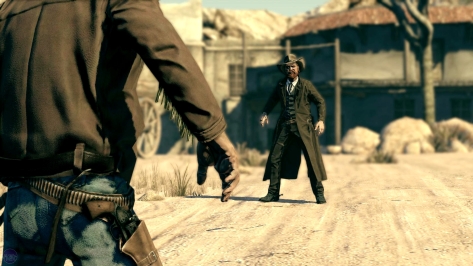 What’s better than a wild west game? The answer is very little. And while Call of Juarez: Bound in Blood is no Red Dead Redemption, it still is one of the better wild west games I’ve ever encountered. It’s nothing to call home to your mother about it, but if there was ever a game that embodied the word “decent” — this is it. If not for some glaring technical problems, Call of Juarez: Bound in Blood could have been one of the better games in 2009. Full of lust, greed, and gun totin’ lawlessness the narrative is more than adequate, and further is a breath of fresh air in the FPS shooter genre. In regards to the gameplay, going gunslinging Rambo on a group of outlaws is one of the more satisfying experiences I’ve ever had in a shooter. 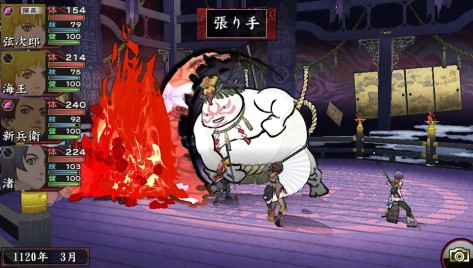 JRPG’s and the PlayStation Vita go together like nutter butters and more nutter butters. Therefore, it shouldn’t be a surprise Oreshika: Tainted Bloodlines is one tasty nutter butter on Vita.  OTB is a strange, enrapturing experience, unique from any other RPG. Providing a deeper plunge into Japanese mythology than any game before it, its depth of content, and complex mechanics can offer a daunting task at first, however, if you’re a Vita faithful you know there is no such thing as a picky Vita player in 2016. Hundreds of hours of gameplay, original features, a captivating narrative, and decent visuals — if you’re a Vita player, and bless your soul if you are — this is a must play. 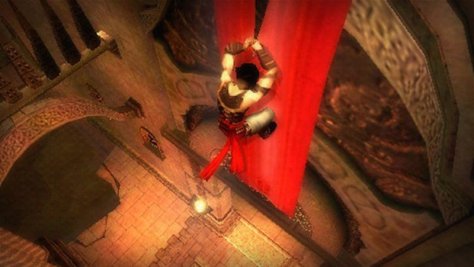 I’ve said it before and I’ll say it again: you know we live in some dark days, when you can’t even get a proper PlayStation Vita game for Free Games with Plus. This is the third month in a row where a PSP game is being offered up as a Vita title. And unlike the past two months, which saw two God of War games, Prince of Persia: Revelations is not an appreciable inclusion. It wasn’t good on PSP and it’s not good on Vita. While the game boasts impressive scope and design, the myriad of technical issues rob any of the joy that could be found. It’s clear Sony is scraping from the bottom of the barrel for Vita games at this point.

Those are the lineups. Now too the exciting part — choosing a victor.

According to the Critics:

This is determined by which line-up has the higher average Metacritic score. Here’s how each category is scored:

Current-Gen: For PlayStation this is calculated by adding the two Metacritic scores of the PS4 games and dividing by two. For Xbox the same thing is done but with the Xbox One games.

Whole lineup: Because PlayStation offers six games to Microsoft’s four, only two of the highest scoring four last-gen/portable are used when determining the whole lineup score, while the lower scoring two are tossed aside. Further, because current-gen (PS4 & Xbox One) games are the salient games in this clash – their scores are counted twice.

I have to agree with the critics here — July belongs to Xbox. For me it all boiled down to this: if I could play and own all of these games, or play and own The Banner Saga 2, I would choose The Banner Saga 2 every single time. Further, it doesn’t bode well for PlayStation that its most exciting game on offer, hasn’t even released yet. While PlayStation has the stronger last-gen offering — simply by not including Tron Evolution — and for once has a decent Vita game on offer, it isn’t enough to turn the tide. If Furi turns out to be fantastic, then the win might go to PlayStation. But this isn’t a game of hypotheticals, so grab the airhorns and packs of Hi-C, it’s time to celebrate, Xbox gamers.