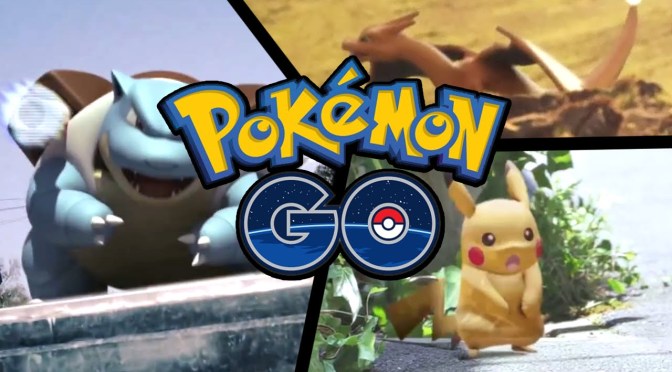 I want to be, the very best. Like no one ever was. To catch them is my real test, to train them is my cause.

These words bring a flood of intense nostalgia for a host of twenty-somethings that had their childhoods shaped by Nintendo’s iconic Pokémon franchise. They are trigger words that transform us into excited children inspired by the adventure and friendship that beckons us into the greater world. 20 years after many of us first experienced the wonderful Pokémon Red and Blue, that promise has finally been fulfilled.

Pokémon Go is the newest smartphone craze to sweep the nation. But unlike other trends like Flappy Bird, Clash of Clans or developer Niantic’s own Ingress, Pokémon draws its popularity out of a generation’s unrealistic dreams made real. As Nintendo’s stock soars and it prepares to overtake Twitter’s daily smartphone usage, I realized that Pokémon Go is something much more special than I had initially thought.

The gaming industry’s most recent pattern has been the open world game, sometimes called a “sandbox” game, where players are given free reign of the map to explore and interact at their leisure. As technology has allowed games to become grander in both scope and density, developers have increasingly shifted toward this structure. The call for “immersive worlds” to explore is emphasized in almost every marketing campaign as games look to give gamers an interesting world to discover and plunder. What started in games like Grand Theft Auto and Fallout 3 has been infused into the likes of The Witcher, Metal Gear, Far Cry and even The Legend of Zelda.

Pokémon Go is different. It gives us an immersive world to explore, perhaps the most immersive gaming has ever given its players; our own. While No Man’s Sky promises to give us an entire universe to explore, Pokémon Go asks us to unpeel our rumps from the indents in our couches and explore the beauty that we turn a blind eye to each and every day. In response to this prompt, the players have responded with an emphatic “yes!”

And so we took our collective first steps into the tall grass.

The game has taken the gaming community and transplanted it into the wider world. Everywhere you look you see people with their phones held at chest level wandering around aimlessly like confused fools. You see cars making strange movements as they suddenly pull over or slow to a crawl. You see groups of people congregated at landmarks conversing and flicking their phones. Truly remarkable sights.

Most of these people would be in other, less interesting places if not for Pokémon Go. But, instead, they are living out the fantasies that they have held since Professor Oak asked them to choose a starter Pokémon back in 1998. They are taking a two block detour on the way home from work because of the lure of Pokéstops and Gyms to strengthen or dismantle. The silhouette of an unknown monster has them scrambling for the proper bearings. With Pokémon Go, Niantic has finally unlocked the potential the franchise has been scratching at since the trading component of the original entries. It has forced us to court adventure in the wilds of our communities.

As a resident of historic Gettysburg, it has not been difficult to embrace the craze. As the site of a national park, there are thousands of points of interest littering my map. In true Pokémon style, my cousin and I hopped on our bicycles and roamed the battlefields for rarities and glory. We were playing a game together, but we were outside, exercising. We were traipsing through rough grass and weeds into the woods to claim a neutral gym. We were duking it out at gyms while other teams were hot on our tails. We were chasing down rare breeds across miles of open field. It is a gaming experience unlike anything I have ever had, but it is absolutely within the essence of what Pokémon is.

Pokémon is synonymous with childhood. It captures a spirit of wonder that no game can truly match. It plays on our desire to be the best while encouraging childlike values of perseverance and friendship. These are the traits that have taken hold of our communities in the past week, and in a time where we are gripped with hatred and violence, they have been a breath of fresh air.

The most puzzling thing about Niantic’s effort is how it has captured the imaginations of people whose Pokémon knowledge begins and ends with a yellow rat. Nintendo’s shares have not spiked due to seasoned, veteran trainers alone. The idea that something wondrous is just around the corner is super effective against the uninitiated. The millions in the thrall of Pokémon Go have proven that the charms of the franchise are universal. It is a beautiful sight to see so many wrapped in the joy of what has made us all love Pokémon for so long. By putting monsters into the hands of every smartphone user, Nintendo has opened a portal between the concrete existence of the general public and the colorful, youthful spirit that defines Pokémon.

Niantic and Nintendo have done something truly special. They have created an open world game that encourages players to explore the world that they already are immersed in, albeit through a specific lens. They have encouraged positivity through true interpersonal communication. While games largely try to hog our attention, Pokémon Go asks us to look around. The simple presentation of the game, and the angry Gyarados reminder in the loading screen, command us to look up rather than down. It doesn’t hand us everything, meaning that we have to truly get out there and discover how the game works for ourselves.

By capitalizing on the spirit of Pokémon, Nintendo has given us a way to make our childhood imaginations come to life. It has created a community that wants to go out of its way to discover something new. An open world that captures our attentions like never before. The difference is that it is real. There are no fast travel workarounds, no shortcuts (except real money) and no excuses. If you want to be the very best, you will have to work for it.

“It’s you and me, I know it’s my destiny.” Now get out there and make it yours.

Brett Williams is an Associate Writer for MONG who is currently ¾ of the way to a completed living Pokédex.  His quest to become the very best continues with Pokémon Go. Follow him on twitter.