As Destiny: Rise of Iron launches the third year of Destiny content, it is incredible to fathom the path that the game has taken to reach this point. Despite lukewarm initial reception that has dogged the game since release, Destiny has persevered thanks to passionate fans and incredible core gameplay mechanics. Rise of Iron provides a continuation of the progress made in last year’s The Taken King, but does little more than add sand into the Destiny sandbox. While it remains to be seen how long the content in the expansion will satiate the rabid community, what is here is a welcome addition to the Destiny universe.

On the multiplayer side, the largest additions come in the form of Supremacy, a mode that has players collecting crests that are dropped upon death (think Kill Confirmed from Call of Duty), and private matches, which finally gave Destiny the wacky tomfoolery that Halo was famous for. Supremacy is a great game mode that forces players into close quarters engagements and changes tactics in a refreshing way. Private matches have provided an injection of fun that makes every weapon a viable, entertaining crucible option. Rise of Iron has finally rounded out the multiplayer experience in Destiny, where anyone can find an experience they can enjoy while making progress toward their overall level.

Rise of Iron’s campaign finally acts on the rich lore developer Bungie wove into Destiny’s world. Lord Saladin, long the face of the multiplayer event Iron Banner, calls on the guardians to fight a threat that he fought to seal away long ago. This threat takes the form of Siva, a techno-virus of sorts that serves to beef up the enemy Fallen faction. The campaign does a great job of fleshing out the character of Saladin while giving us the background of the Iron Lords, both of which longtime players have been clamoring for. Unfortunately, the 2.5 hour campaign feels a few missions too short, leaving the story with pacing issues and a rushed conclusion. This rushed nature undercuts the Siva threat that literally courses through the veins of every piece of new content. Despite these issues, the story missions provide some breathtaking moments to experience.

The aesthetic that Bungie built for Rise of Iron is cohesive and interesting, extending deep into the new Plaguelands patrol zone and to the highest point of Felwinter’s Peak, which contains the new social space. The Iron Temple is easily my favorite social area, as its interesting characters, arthurian feel and clever secrets make it the most thematically interesting of these areas. This extends to the Plaguelands, which feels massive when compared to the other zones in part because of the exciting new patrol missions and hidden treasures. The snowy look juxtaposed by pulsing, red Siva corruption gives it a distinct feel all its own. While not as deep as The Taken King’s Dreadnaught, it is still a step above Destiny’s initial zones and begs to be explored.

Coinciding with the Fallen lore is the new Archon’s Forge public event arena in the Plaguelands, a thunderdome-style hybrid of vanilla Destiny’s Prison of Elders and The Taken King’s Court of Oryx that has players fighting through waves of enemies, culminating with a boss. The events are great fun, but are held back by a few puzzling design choices. The encounters are activated by finding offerings out in the wild, but players can only hold one at a time, limiting the amount of mileage they can get out of the activity. And unlike Court of Oryx, players that present an offering are not guaranteed loot from the encounter. These limitations prevent Archons Forge from living up to its full potential. A future patch may make it more accessible, but as it currently stands there are serious hindrances toward making it a rewarding enterprise.

The stingy nature of Archon’s Forge carries over to Rise of Iron’s progression system as a whole. Taking a major step backward from Destiny’s April update, it is now much harder for a player to raise their light to higher levels in an acceptable time frame. Rise of Iron handicapped gear to drop only slightly above your current level. This change greatly slows the progression process, forcing players to grind strike missions, which are the most consistent source of better items. Multiplayer has the potential for high level drops, but they do not occur with enough regularity to be relied upon for levelling. Although grinding has always been a major part of Destiny, the system does not effectively reward players for the investment that they are making.

The lengthy grind serves to highlight the cracks in the Destiny foundation. For the first time in a game largely based on repetition I was getting bored of repeating the same strikes over and over. This includes the new Wretched Eye and the revamped Year One staples Devil’s Lair and Summoning Pits (now Abomination Heist). Even with these new missions, the repetitive nature in the DNA of Destiny has never been more apparent. With progression slowed and a narrow path through which to achieve it, Rise of Iron could potentially alienate all but the most hardcore.

Once players are able to achieve higher levels, they will find their efforts rewarded by possibly Bungie’s best raid to date. As arguably the most accessible raid from a mechanical standpoint, Wrath of the Machine, a climactic struggle with the leader of the Fallen threat, is a perfect combination of the lessons learned from the game’s previous raids, and the premiere Destiny experience all players should be striving for. This raid hits a sweet spot of frantic mechanics, insane spectacle, precise teamwork and hidden treasures. Best of all, Bungie gave players fantastic gear to earn from the event, giving dedicated guardians ample reason to master the intricate encounters. Wrath of the Machine is easily the best piece of content in Rise of Iron, and is one that players would be foolish to skip.

The raid is not exclusive in its fantastic design, as Rise of Iron’s exotic quests are a massive upgrade from The Taken King. Each of the four quest is a perfect representation of the weapon that guardians are struggling to earn. The Gjallarhorn quest has players discovering the legend behind the weapon and earning the right to wield its awesome power. The Khvostov, an exotic variant of the first weapon received in Destiny, takes players to where it all began in a satisfying nostalgia trip. Best, and most intricate, of all, the quest for the raid exotic is deliciously complex to an absurd degree, requiring knowledge of binary to even discover. Each of these weapons feels special because of the journeys necessary to acquire them. 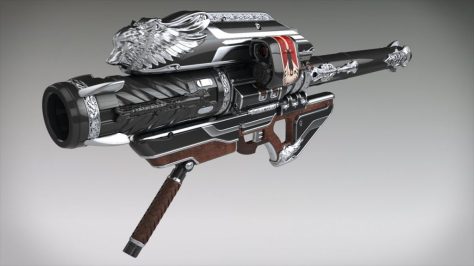 If you are new to Destiny, now is as good a time as ever to jump in. The Destiny Collection might be one of the best values currently on the market, as it allows players to potentially play through three years of content. I highly recommend picking up the game with a friend to experience all the game has to offer together, but if you are late to the party, Bungie provides a levelling item so that it is possible to immediately begin Rise of Iron. The game has changed exponentially since Fall 2014, so if you weren’t a believer then, you might find yourself with a new gaming addiction. And if you do choose to play through Destiny in its entirety, the kinks of Rise of Iron might well be worked out by the time you are ready to experience it.

While playing Rise of Iron, I couldn’t help but think that the content saw Destiny coming full circle. As a Day One player, I have sunk hundreds of hours into the universe that Bungie has created. Through the good times and the bad, the incredible gunplay, sound design, cooperation and community have given me ample reason to return time and time again. While Rise of Iron does not reinvent the wheel, it gives us more quality content to sink our teeth into. The return to Earth, reintroduction of classics like Thorn and Gjallarhorn and simultaneous iteration has reminded me where Destiny has been while still pointing toward the future. The smaller nature of the content is a constant reminder that the bulk of the Destiny team is hard at work on Destiny 2, and while this might mean there is less for the hardcore player to chew through, it bodes well for the future of the franchise. Rise of Iron leaves this iteration of Destiny in a great place, and I am excited for what the future holds.

Rise of Iron is a worthy addition to the Destiny universe, with great new content that gives players more of what works without improving on the things that don’t. The content certainly has a few warts, but the new multiplayer modes, the fantastic raid, engaging weapon quests and positive community provide enough reasons to hop back into Destiny’s world. The game’s original design limitations are largely responsible for holding the game back, but Rise of Iron has brought out as close to their maximum potential as possible, leaving the game in a great place as players wait for the true sequel. And with the release of The Destiny Collection, there has never been a better time to discover your inner guardian.

To learn more about our review scale, click here.

Brett Williams is an Associate Editor for MONG who is part of the Titan Master Race. He is always willing to help a fellow guardian in need. You can find him on PS4 as SquatchHunter216 or on twitter.

One thought on “Destiny: Rise of Iron Review”