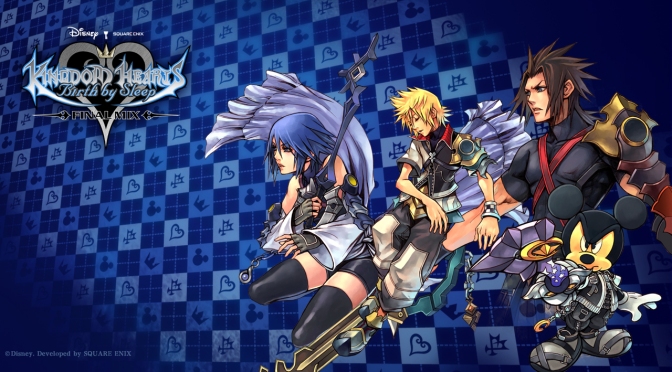 About three minutes after playing Kingdom Hearts II Final Mix (I had to take a breather to soak all of the game in) I promptly started up the menu for the prequel to the series, Kingdom Hearts: Birth By Sleep Final Mix. However, unlike with the previous game, I hadn’t played Kingdom Hearts: Birth By Sleep when it originally came out on the Play Station Portable in 2010. Despite generally positive reviews during its launch, the question still lingered: how would the last-gen handheld game fare on home consoles?

I was a little confused at first to find out that the story actually had three main characters that you could play as. There was Terra, who used strength to try to quell the darkness within his heart, Ventus, the youngest who cared for his friends, and Aqua, who was good-natured and filled with light. The three friends’ storylines intertwined throughout the game. Along the way they come across Keyblade Master Xehanort, who becomes important to the characters’ fates in this and the past games. I completely glossed over the fact that Tetsuya Nomura’s recommendation in interviews to play in the chronological order of the character’s timelines in the story, which would be Terra-Ventus-Aqua, and played at Ventus first, followed by Aqua then Terra. However, the order I played in did not affect the game negatively

Ventus’ (or “Ven”) storyline was the most interesting as it combined his current quest and his mysterious past. The relationship between his story and characters in prior games is possibly the most relevant to the series. Terra’s storyline was interesting as it showed the opposite side to Ven and Aqua’s by taking to the darkness’ side as he attempts to stave it off from himself. His journey is also an emotional one, and leaves many more questions about the game’s ending. However, unlike Ven and Terra’s storylines, Aqua’s was much more bland in comparison. Aqua, who serves as the “light of reason” to the plot, is the ultimate good that aims to help out everyone. Yet, this is also her downside as it makes her character lack depth and make her quite boring at times.

The game follows all others in the Kingdom Hearts franchise in that characters must navigate through other Disney-inspired worlds and “help” out the characters within. The worlds in this game were very interesting because they were almost completely new to the series (with the exception of Neverland ad Olympus Coliseum), and featured familiar characters like Experiment 626 (Stitch), Snow White, and Minnie Mouse, and many others. As an interesting mechanic, the worlds are viewed from three different perspectives depending on which character you are playing as. This has obvious good and bad consequences to the formula. Good because it showed three different viewpoints to a situation adding depth to the storyline, but bad because of the uneven balance created depending on which viewpoint had more emphasis put on it. For example, Ven’s viewpoint in Enchanted Dominion had less depth than Terra or Aqua’s, making it the least compelling storyline of the bunch. Familiar original worlds and characters appear in the game too, like Sora and Riku at Destiny Island. 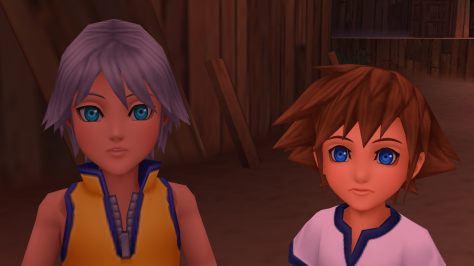 Like Kingdom Hearts II Final Mix, Kingdom Hearts: Birth By Sleep Final Mix was one of two playable games offered in Kingdom Hearts 2.5 HD ReMIX. It’s apparent that the HD quality implemented in the final mix version did a lot for the game’s graphics and overall look. While everything was overall better looking, some characters got better treatment over others. Terra looked a lot more pixelated than Ven over the course of their stories. This does not deter from the fact that the game was beautifully remastered from its original form, and may be one of the more well-designed games out of the series.

The gameplay for Birth By Sleep was completely different than other games within the Kingdom Hearts series. This game implements a mechanic called the “Command System” which allows customization of different actions in a Command Deck in order to create more powerful moves. It’s similar in the way that Drives worked in Kingdom Hearts: Chain of Memories, but is more accessible and simply just makes more sense on the PlayStation console (as well as the PSP I’m sure) than the Card System used in Chain of Memories. It took a while to warm up to this new system, but when I finally did I absolutely loved it. Though I remain a bigger fan of the original gameplay, this was a good alternative for those who found the old way repetitive. The game also features a new “D-Link” (“Dimension Link”) that allows your character to use other character’s Command Decks. I’ve heard great things about the D-Link option, that it comes in handy with enemies that are immune to your powers, however you can go through the entire game without using it. 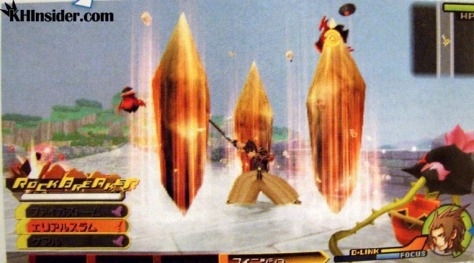 Perhaps because of this new Command System, I found the game the hardest in the whole series. Some of the enemies were difficult and took many, many tries to beat. One that sticks out in mind is a fight Aqua has with a boss in Neverland that had me close to tears when I finally beat it. Though tough, a lot of these enemies were easily-beaten with very simple moves used patiently over time, which kind of cheaped the gameplay. Guard alone was especially helpful.

This game was really, really fun to play and a solid prequel to the Kingdom Hearts series. The stories of Terra and Ven were captivating and engaging, while Aqua’s fell flat. The gameplay, while new and foreign, was still interesting to learn and utilize. However, simple moves can be used to negate the need for a Command System, taking a bite out of some of the challenge. This game offers an even balance of gameplay and story, which can be an upside and a downside for players. It is very difficult to incorporate three characters’ stories into one game, but Square Enix did so in an overall appealing way. Fans of the Kingdom Hearts franchise who never played the original game because it was not on the PlayStation home console (like myself) will appreciate the insight this game provides to the story of the previous games. To those who are new to the Kingdom Hearts series I wouldn’t recommend playing this game until after playing Kingdom Hearts, Chain of Memories, and Kingdom Hearts II.

For more information on how our review scale works, click this link.

Audrey Lips is one of MONG’s Associate Writers and is currently balancing a Journalism major while secretly hoping to get her Hogwarts acceptance letter. You can follow her TMI posts on Twitter.