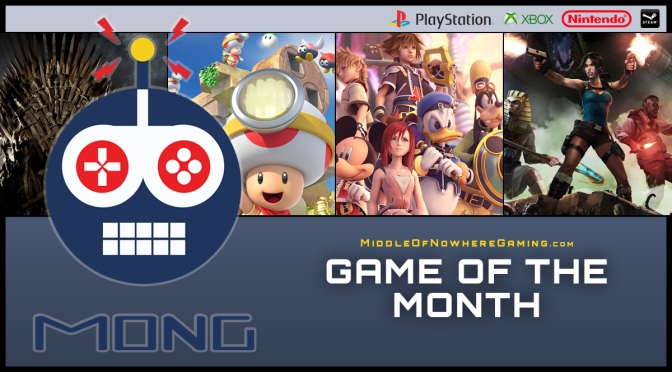 The time has come! Our official Game of the Month for December 2014 is…

That’s right! December was a month of small-scale yet much-anticipated releases, including a new Kingdom Hearts remaster and the start of a new Telltale IP, Game of Thrones. But despite this stiff competition, Nintendo’s unlikely hero climbed to the top of our monthly rankings, inching out second-place Kingdom Hearts HD 2.5 ReMIX by a mere 3 points and bringing home the third consecutive Game of the Month award for Nintendo.

You may know the diminutive Captain Toad as the guy who’s been helping you out since Super Mario Galaxy, supplying Mario with Power Stars, Super Mushrooms, and other helpful pickups when they’re needed most. Captain Toad: Treasure Tracker tells the story of how Captain Toad and his pal Toadette found all that treasure in the first place, an adorable (and slightly self-aware) premise that sets the tone for the rest of this miniature adventure. 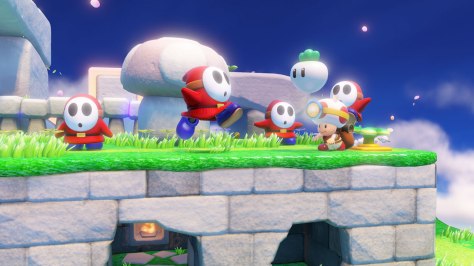 What really won us over, though, was the surprising depth hidden behind the game’s charming exterior. Each of the puzzlebox-like levels is packed with secrets and dense with moving parts, requiring you to observe the stage from all angles and carefully plan your movements. Unlike Mario, Captain Toad never learned how to jump, so resourceful use of ladders and cliffs are required to deal with enemies and bottomless pits. (Seriously, Goombas have never been as intimidating as they are in this game.)

The game kept many of us busy for longer than we expected, too; with hidden collectibles, secondary objectives, and a heaping helping of bonus levels, the game delivered far more value than suggested by its budget price tag. Not bad for a new IP that started out as a Super Mario 3D World minigame!

Captain Toad: Treasure Tracker came from out of nowhere during Nintendo’s 2014 E3 Direct presentation, but now that we have the game in our hands, it’s clear how much sense it makes. This creative little gem delivered the fun factor better than anything else this month, and for that reason, we award our December 2014 Game of the Month award to Captain Toad. Time for adventure!