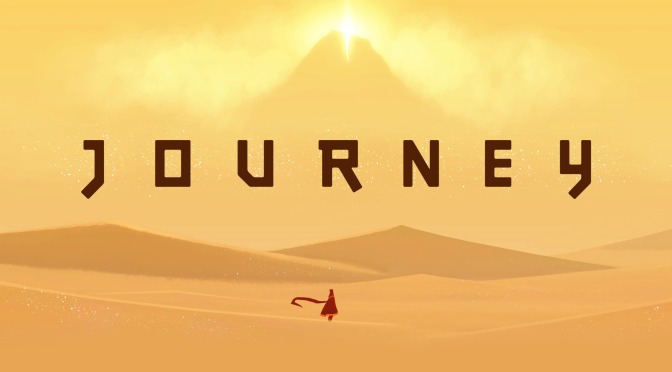 Something that stands out here at Middle of Nowhere Gaming is our diverse staff. The diversity behind everyone’s tastes is what makes our content refreshing. Everyone has that one game. That ONE game that stands among the rest as their favorite. It’s interesting to see how every game on our favorite list is so different from one another. Here’s the list of some of our favorite games of all time.

My favorite game of all time? Resident Evil HD (the most recent version of REmake) for sure. The original Resident Evil terrified me as a kid, way back when I could only watch my brother and his friends play his new PlayStation. I had only ever played the 2D Mario games, so something with so much gore and intentional scares was both eye-catchingly amazing and horrifying at the same time.

I later discovered REmake when I was twelve years old, first released on the GameCube. The graphics were absolutely stunning, but what excited me most was the idea of finally taking control of Chris Redfield or Jill Valentine for myself, guiding them through the Spencer Mansion. The atmosphere and sound design was top-notch, so much so that the stress it caused only allowed me to play in 15-20 minute bursts. Still, I was hooked instantly.

The way the backstory is presented through tragic notes and journals, the flawless atmosphere presented through static camera angles, brain-teasing puzzles, and memorable cast of characters all make Resident Evil HD my favorite game of all time. To read my full thoughts, check out my review.

Star Ocean: The Second Story taught me that an RPG doesn’t have to be sifting through menus and mashing X to get through a random encounter. It told me that an english voiceover for a Japanese game doesn’t have to be muted. It showed me that going off the beaten path could be rewarding, because who knew where that NPC would take me, or what optional character that boss would unlock if I revisited this town. It made me understand my characters; that Claude should master counterattack over Rena, who should learn about music for crafting equipment later. It let me choose who I valued most, and those choices resulted in more endings than I knew possible. Star Ocean was the gentle wake-up call to seven year old me that there were grand, detailed, and deep stories to be told that wouldn’t fit on a single disc.

Now if you’ll excuse me, it’s time for my daily email to Square Enix reminding them the remake for PlayStation 4 isn’t in North America yet. I have a good feeling this one will get through.

I want to say the Metal Gear Solid series, but I can’t. I want to say Alan Wake, but I can’t. I want to say the Resident Evil series, but I can’t. The one game that has grabbed a hold of me since I first played it a couple of years ago has yet to let me go. That game is Persona 4. I first played it shortly after playing the previous and just as amazing Persona 3 and since then Persona 4 has taken over my life. There isn’t a week goes by where I don’t listen to music or watch some of my favorite moments in the Animation. The funny thing is that I really didn’t like JRPGs all that much prior to playing Persona 3, but those games have turned me around. I played some of the older Persona games, but theircombat feels outdated and I even started playing a bit of the mainline Shin Megami Tensei games.

Persona 4 has taken such a hold of me that I paid $100 for the PlayStation TV JUST to play Persona 4 Golden and I don’t regret that decision one bit. I even bought a 3DS just so I can play Persona Q: Shadow of the Labyrinth. I bought the fighting games, and I have the Disco Fever Edition of Persona 4 Dancing All Night on the way. With Persona 5 on the way, my obsession of all things Persona is going to reach a fever pitch.

Jak II is and probably will forever be my favorite game of all time. In spite of it’s unnecessary difficulty, that was the game that I played constantly while growing up. I love that it took the mechanics of the first game, built upon that, and stepped away from what 3D Platformers had been doing up until that point.

It found a unique way of fitting an intriguing story into an open world 3D Platformer. It avoided being just another collect-a-thon platformer and added more modes and features bringing into somewhere between Crash Bandicoot and Grand Theft Auto. One moment you can be running from the Krimzon Guard in a high speed chase and a few moments later you’ll be having a stretch of 3D platforming bliss and then an epic boss battle. This game finds a plethora of ways to explore new mechanics everything from mechs to hoverboards and the implementation of guns into a 3D platformer. That is why I love Jak II so much. 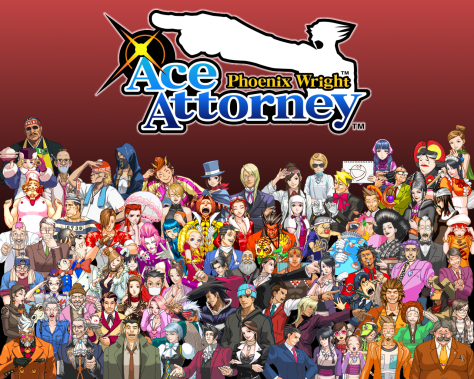 My favorite game of all time is without doubt the original RollerCoaster Tycoon, but I feel like that’s a bit of a boring answer.  In lieu of speaking about my favorite game, I will talk about the game (or rather, the series) for which I have the most passion:  Ace Attorney.  For the sake of clarity, I want to note that I am mostly referring to the original trilogy here.

This series is so near and dear to my heart and represents what I love about video games. Not only that, but the games represent what I love about storytelling in general. I love the wide variety of unique characters who are all fleshed out fully, I love each and every case with its twists and turns, I love how downright weird and silly the games are, and I especially love its beautiful and varied soundtrack. I was never into video game music until I played the first Ace Attorney game, and now I am looking for a way to incorporate an Ace Attorney song into my wedding next May. Beyond the games themselves, I also love that there is a full-length live-action Ace Attorney movie that is by far the most faithful live-action adaptation of a video game I have ever seen.

The Ace Attorney series is not for everyone. There is no combat. There’s no jumping. There’s a ton of reading. Also, as I said, it’s really weird. Plus, the game contradicts every legal system in existence (even its own), but I think it knows that. That’s another thing that makes it fun, I think.

Ace Attorney has more heart than any game series I’ve ever spent time playing (except maaaybe the Professor Layton series, but the two came together at one point anyway). Plus, it has Miles Edgeworth. Enough said. 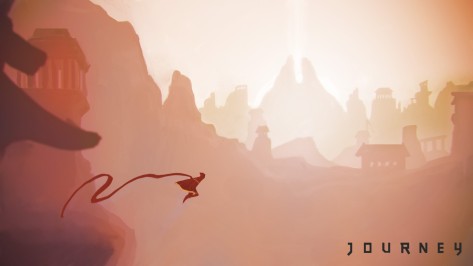 My favorite game of all time would have to be Journey, made by ThatGameCompany. ThatGameCompany has a history of creating unique experiences but Journey was the first one that truly captured me.

Before Journey I was decently appreciative of games as an art form, but after my first playthrough the fog was lifted and my favorite genre of games was discovered. Games crafted to be a short but sweet and impactful experience have come to be my favorite. Journey is a work of art from its Grammy nominated score to its stunning visuals. This is all perfectly blended in a world created with seamless online connectivity that isn’t bogged down by voice chat or textboxes. You’ll find that this mysterious companion you journey with will form a personal bond with you despite being completely mute. Journey leaves you to create your own stories with the people you meet in this quiet but breathtaking world, while having a beautiful story of their own about the ruined civilization that you venture through.

All-in-all Journey has been the definition of what games can be in art, and has successfully produced some of my favorite video games moments of all time.

Without a doubt, my favorite game has to be Pokémon Sapphire. Though this wasn’t my first Pokémon game, nor my first GameBoy Advance, it was the first game that I absolutely “got.” I knew how Pokémon games worked, I understood the mechanics of JRPG’s and was excited to explore every nook and cranny of this wonderful world. Dumping nearly 1,000 hours into this game (as well as all the other Pokémon games of the time) as a pre-teen offered loads of fun and a wonderful updated world to the Pokémon Blue that I fell in love with all those years ago. Needless to say, there are a bunch of close games that are among my favorite, but that list is for another day… 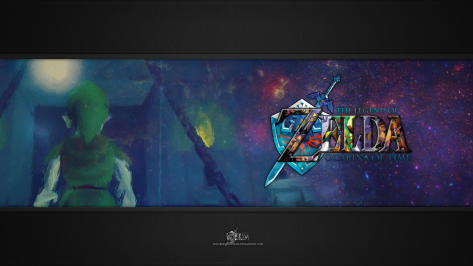 The Legend of of Zelda: Ocarina of Time has been my favorite game since I first picked it up many years ago. I remember spending an entire winter break playing it until my hands hurt, trying to figure out puzzles, and where to go next just so I could get the next piece of the story. That story is what, for me, sets Ocarina of Time above other Zelda games, and other games in general. OoT tells a heartfelt story of a kid who is forced to abandoned youth far too soon, and is forced to give up everyone he cares about in order to save the world, a responsibility he never asked for. I think among all the praise that the game gets, the story gets lost, but the story makes it outstanding, every bit as much as the for the time revolutionary gameplay and graphics. Ocarina of Time is a game that reminds me of a different time and place in my life, and that is why it holds a place in my heart that will never go away.

Editor in Chief for MONG

Although it may not surprise most, and some may sigh at the common answer, my favorite game of all time is Metal Gear Solid. The easiest way to justify that answer might be to say that it was so revolutionary for its time; it made me believe in dramatic, deep video game storytelling; it gave me a sense of what I always wanted from video games. Today, I can realize all of these things to be true, but none are precisely my own answer.

In truth, I still find it difficult to pin down an absolute reason here. Unlike many others, I have likely only ever played through my favorite game (to completion) one time. Still, it’s one game that I can recall scenes from and have surely enjoyed more than any other, and that’s because it was an experience I shared with some of my closest childhood friends. At that time, and well into adulthood, MGS sparked conversations and a common passion among us. Today, it’s a symbol for one of the heartstrings that still throbs at the thought of having lost someone dear to me.

It’s a feeling that reminds me that sometimes the experience far outweighs the content, no matter how brilliant. Sometimes it’s about who you’re sharing that experience with that makes all of the difference.