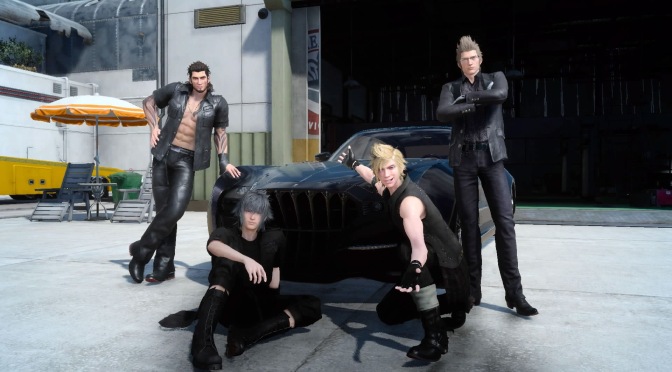 From its opening moments, Final Fantasy XV is a game that is completely built upon the bond of its four protagonists. The game drops players into a relationship that has been seasoned and seared over many years and experiences. While supplemental material, namely the Brotherhood anime, fleshes out the individual characters and their relationships with player character Prince Noctis, the game is designed in a way that even those with no prior knowledge can sense their deep connections through mechanics and acting. The result is the most real friendship that I have ever seen in gaming.

Even though I have spent less than 10 hours with the game, it is clear that the things XV does well are predicated on the sense of friendship the game portrays. The critical consensus seems to agree, with many reviewers citing this friendship as the key ingredient elevating the game beyond the sum of its parts. IGN’s Vince Ingenito said in his review, “Prince Noctis and fellow travelers Gladiolus, Ignis, and Prompto aren’t a loosely assembled band of strangers uniting to face evil…they are close, long-time friends, and it’s this closeness that gives Final Fantasy XV’s often incoherent story all the heart it has.” Battles, the open world, leveling and even simple car rides are all enhanced by an unwavering sense of camaraderie. If such a realistic bond between friends can prop up as many shortcomings as Final Fantasy XV has, why do games rarely aim to capture this universal emotion?

Final Fantasy XV stands in exclusive company in its treatment of the protagonists as peers. Most games add an additional wrinkle to the friendship dynamic. Many feature deep relationships between Master and Student. Sully in the Uncharted series and Vesemir in The Witcher 3 are both mentors first, friends second. Brothers in Arms are another common dynamic, with comrades being forged in the fires of war. While this is a powerful bond, exemplified by Marcus Fenix and Dom Santiago in Gears of War, it does not allow for the same amounts of relatability as what XV presents. But easily the most common relationship found in games is the fate-bound group, where characters have little to no prior experience with each other but are brought closer by world-altering stakes or circumstance that require their involvement. While watching these relationships develop over the course of a game makes for interesting narrative, it rarely captures the feeling of true friendship that every person understands intimately.

That is what makes Final Fantasy XV different; the relationship that these men have together is ripped straight out of reality. Like all friend groups, they are brought together by a specific goal or interest, in this case their duty to Noctis as royal advisors, but once together their shared experience forged an obvious bond that would urge them to see each other to the end of the line, no matter what. They don’t know what they are getting into, and at this point in the game neither do I, but it is only natural for friends to bite off more than they can chew. Whether exploring or in battle, your friends are by your side and behaving in ways that your real-life friends would, whether they are chiding Noctis for complaining about heat or teaming up to damage a large foe. In one instance, Noctis was put into danger mode and moved behind a nearby car for cover and much-needed healing. Ignis stopped what he was doing, scanned the general vicinity for where I had gone, found me, and helped me back on my feet. It was a small touch, but this character reaction was symbolic of the powerful interactions the characters have as a whole.

The extent to which Square Enix nailed everything about this friendship cannot be overstated, from their roles together to their detailed interactions. Prompto is the jokester, giving much needed levity to the group. Ignis is the group mom, whose organizational prowess and practical knowledge are instrumental to their success. Noctis is the moody, angst-ridden friend who is loved despite his warts. And Gladiolus is the stalwart guardian, the best in a fight who you always love to have in your corner. These characters can find parallels in almost every group of male friends out there, which allows male gamers to connect with them like they would their own personal circles. This relatability reaches into the details, like a comfortable silence during a long car ride, goofy photo ops and selfies at scenic spots, post-battle fist bumps straight off the local basketball court and animated storytelling (with likely embellishments) before a night under the stars. These are beats that are inherent to the male friendship experience, and are valuable to those who can directly relate as well as those who desire a window into that world.

That is why the decision to focus solely on male characters in key to Final Fantasy XV’s success. In an interview with Gamespot in March 2015, director Hajime Tabata said, “speaking honestly, an all-male party feels almost more approachable for players. Even the presence of one female in the group will change their behaviour, so that they’ll act differently. So to give the most natural feeling, to make them feel sincere and honest, having them all the same gender made sense in that way… we think, male or female player, that everyone will feel a certain connection and bond with the four characters.” This sentiment seems to have been proven true, as the friendship portrayed is the glue that holds the game together. Despite initial backlash, I think that many have come to realize that adding that female character would remove a lot of the game’s magic.

And if realistic friendship is truly the magic of Final Fantasy XV, why isn’t this relationship explored more?

When thinking of the most real friendships in gaming, the two examples that kept coming to mind were Persona 4 and the original Kingdom Hearts. Both games tackle themes of friendship in different ways, but both go about the concept in an organic and realistic way. Persona 4 is unparalleled in its portrayal of the development of friendship, with players acting as the new kid in town and being allowed to grow friendships with the party in whatever way they choose. There are plenty of group interactions, but the true power comes from conversations had through social links, where characters share their inner struggles and loves with the player. As a result, the characters truly become close friends throughout the game, making it more difficult than ever to say goodbye when the credits roll.

Kingdom Hearts functions on a more similar level to Final Fantasy XV in that the main trio of Sora, Riku and Kairi are longtime friends. However, as a shared curiosity to explore the greater world culminates in a choice to embrace darkness or turn away, Sora and Riku move in different directions. The rest of the game is built upon this friendship and how Sora is constantly striving to move forward and find his lost friends, but becomes much deeper and meaningful when he doesn’t like what he finds. The climactic battle with Riku, possessed by the power he craved, is tragic and satisfying thanks to the relationship that was established throughout the game. On the flip side, famous party members Donald and Goofy are motivated by their friendship with Mickey Mouse, leading to shared goals that build their in-group dynamics. It feels real and enhances the game experience.

Rip these themes out of their games and you are left with a basic turn-based RPG and an action-based one. These concepts are undoubtedly fun and have mechanical depth, but what truly drives these games are the themes of friendship that feel real and relatable. The same goes for Final Fantasy XV. Without the core friendship mechanics the game becomes a lifeless action RPG with a confusing narrative, but with them it is transformed into a special game.

So if these themes can lead to elevated gameplay and narrative, why don’t more games feature these types of relationships? In a landscape filled with Zombies, post-apocalyptic wastelands and buff military soldiers, there is certainly more room for realistic friendship. This can be said of all media, as the typical American Hero is a protagonist who sacrifices themselves and tackles problems alone. Characters are often dealing with personal demons that only they can defeat. Final Fantasy XV portrays vulnerability among all 4 of its protagonists, which is something that is truly rare in media. We value strength, not sensitivity. But this game plays a different tune, showing that people, specifically men, are incapable of doing everything alone, that they need others helping and supporting them. The game is counteractive to the mythology that has been built for ages.

This lesson is especially poignant for women. While the choice to leave women out of the main party has been controversial, especially for a series that essentially pioneered the strong, female protagonist in games media, this controversy masks the fact that Final Fantasy XV is equally appealing to female players. From my personal experience, which is obviously completely subjective, the sexes don’t really understand each other. There is a gender gap that exists that will never be completely crossed. From our goals in conversation to the ways that we carry out those goals, men and women come to natural misunderstandings on a daily basis. A male relationship is inherently different than a female relationship or mixed relationship. Final Fantasy XV gives women, in many cases, a never before seen glimpse into the male relationship.

While movies and television primarily boil their interactions down to sports, girls and farts, XV succeeds in painting men as they truly are. Men are constantly striving for status, which is why they tell stories with themselves as the main characters, rip on each other and compete at everything. But beneath the masks of leather jackets and gelled hair are sensitive human beings with glaring insecurities suppressed with hokey confidence. Entrance into this realm of vulnerability must be earned through mutual trust and respect, which means it is off limits to women, with the exception of the one-to-one level. Final Fantasy XV gives women a chance to understand these relationships in a never-before-seen way, providing an opportunity to glimpse the male psyche. While men can directly relate, women can directly experience a relationship that they have always been just outside of.

As we look for new stories and games that push the boundaries of interactive media, now is the perfect time for a game that allows players to step into a realistic friendship and feel like a part of it. Games can capture this feeling in ways that other media cannot because of its interactivity; we are involved in every facet of the action, not simply watchers. While many games attempt to tell a story that is cinematic, Final Fantasy XV tells its story through the smaller moments, little things too inconsequential to find their way into a 2-hour film. But as they build up over the course of an adventure, they can elevate a game to previously impossible heights. That is why the game is connecting with millions despite its incoherent story, and that is what makes the game great.

That is the power of friendship.

Brett Williams is an Associate Writer for MONG that is currently packing for his own monster-bashing, tomb-raiding and survivalist road trip with his pals. If only his car was as chic as the Regalia.

2 thoughts on “Final Fantasy XV and the power of friendship”