Blizzard’s First shooter: One of the Generation’s Best

Imagine if Team Fortress 2 had a baby with a more awesome version of Team Fortress 2, and that baby was raised by Blizzard — that is Overwatch. Not a MOBA, not Battleborn, Overwatch is a multiplayer,first-person hero-shooter that emphasizes cooperative gameplay over the solo-Rambo route. Combining smooth, addictive gameplay, a cast full of interesting and distinct characters, and a refreshing presentation — Blizzard has emerged with yet another cash cow on its hands. Despite not usually being a fan of multiplayer games  — Overwatch, is the most fun I’ve had with a game in years.

The characters are paramount in Overwatch, and Blizzard’s shooter has scads of them — 21 in fact. More importantly, each character feels disparate, and each brings a whole new approach to playing. Of the 21 characters, there are four classes — offense, defense, tank, and support. Within these classes every character feels unique. For example, defensive hero Bastion, a mobile robotic turret, is vastly different and demands a different skill set than Widowmaker, a sniper defensive hero. While each character is hard to master, each is also easy to learn, providing incentive to acclimatize to each hero, not only to see if you want to play as them, but to learn their weaknesses.

Because there’s  21 heroes to choose from — character selection is more strategic than merely picking who you want to kill people with. Depending on the game mode, which is random, your objective (also random), who your teammates are playing as, and the situation of the match, you’re going to want to choose different heroes. If no one on your team is playing a support character, you might want to play as Lucio. If your team is having trouble securing an objective you may opt to play as a tank hero like Reinhardt, who can throw his shield down on an objective to momentarily gain control of it.  Depending on the scenario, each character has something to offer. The benefit of that, unlike many other games with expansive rosters, is you’re never inclined to cling to one or two characters, even in a single match.

In other games, a cast of 21 characters can be quite daunting. However, for Overwatch, where each character is brimming with distinctive traits and a sui generis look — this isn’t an issue. Further, its key to the function of gameplay. Being able to recognize each hero and recall said hero’s abilities is crucial. Knowing to never get trapped in a tight space when Junkrat is lurking or that when you hear Mcree say “It’s high noon” it’s time to spam all the buttons until you reach safety. And because the game is 6v6 you never feel deluged with tactical options and how to combat the opposing team’s six heroes. The problem with Team Fortress 2 was the 12v12 matches, where the cluster amount of enemies made it hard to tell which class you were facing, and therefore difficult to come up with a strategy. Overwatch remedies this problem with its 6v6 formula, and the result is a tighter and more strategic experience.

At first glance character abilities appear shallow. However, despite the fact that each character only has an exiguous amount of abilities, all of them have depth and an innumerable amount of synergy possibilities. For instance, using Zarya’s graviton surge to draw in and trap multiple enemies in a cluster, followed by making it rain grenades with Junkrat’s frag launcher, is a combination that can change the balance of a whole match. However, every ability, every combination, and every strategy has an equally effective counter, showcasing where Overwatch shines brightest — in its balance. OP doesn’t exist in this game; if you die it’s always because you aren’t deploying the correct tactics.

There’s also a “play of a game” and a section of voting for the best performance (which includes up to four different players and their accomplishments) after every match.  When you land either of these achievements, it’s equivalent to — I can only imagine — receiving a pat on the back and a cookie from Vin Diesel. Probably, double chocolate if I had to guess. The best part of this system is the highlighting of players who usually never get any appreciation — like support characters. Whenever a player plays the thankless role of a healer like Mercy, and they land on the best performance voting section, they almost always get the most votes. This in turn gets more players to undertake that role on a team and therefore the result is, unlike most multiplayer shooters, isn’t a team full of mini-Rambos. It’s these subtle things that enable Overwatch to provide a rare teamwork experience — especially on consoles where teamwork is extremely scarce.

The one notable fall of the game is the reliance on willing teammates. While the scenario wasn’t frequent, sometimes I found myself on teams where three people all chose to play as Tracer or the entire team was playing as defense characters when the objective was to attack. The result was a steamroll each and every time. However, this is a problem found in all shooters that employ some sort of team-tactics, and while Blizzard didn’t quite manage to get over the hump, they did do a better job combating this issue than most. Hints during character selection that say “no support” or “not enough damage” encourage players to choose characters that make sense in regard to team dynamics, or at least remind them that, while six Bastions might sound like a good idea, it’s actually not. It’s terrible. Trust me, the answer never involves more than two Bastions. 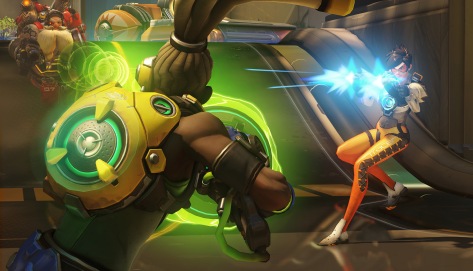 While we’re on “the falls” of the game — let’s talk about those microtransactions. While, Overwatch’s loot boxes aren’t nearly as egregious as other game’s microtransactions — in face of a $60 (on consoles at least) multiplayer only game, they aren’t in the best taste. The loot boxes, which are unlocked each time you level up, only provide random cosmetic items, such as skins and victory poses. They do not affect gameplay at all. However, they still seem a tad indecorous. Forking over $60 for a multiplayer-only game, which only comes packaged with 12 maps and a handful of modes, is forgivable because of how tailored and polished those maps and modes feel. But when I see a player running around in a sexy Road Hog costume — that I don’t have — because they bought extra crates: I’m not mad, but I am bit sad. In short, these microtransactions are still nowhere near pitchfork worthy.

Blizzard is well-documented for its long-term support of its games. This piled on top of the fact that all future levels, modes, and characters are set to be free, means you better get use to Overwatch, because it’s staying for awhile.

Overwatch is the most flawless 9.6 I’ll ever give. If it launched with competitive play, one or two more modes, and some better maps (I’m looking at you Temple of Anubis and Hollywood) it may even have reached that coveted 10/10 score. Still, Blizzard has yet again set the standard, and I pity any other multiplayer game that has to follow this up.